Chaos in UK over Brexit.
Have you done the #10yearchallenge yet? It’s (possibly) sinister (or not).
Scientists being forced to apologise for calling out acupuncture for being the shitty pseudoscience that it is.
A ridiculous amount of fuss from everyone – yes, everyone – over a shaving ad.
Zimbabwe in a mess. Again.
Terrorism in Kenya. Again.
USA in Government Shutdown paralysis. Again.
And the usual suspects on SA’s social media scene reminding us what we should think, type and how we must feel about all of these things.

If ever there was time for an asteroid intervention, this would surely be it.
But I’d actually like to see how the footy season ends first. Please.

Thankfully, there’s always one voice of sanity in this mad, mad world. The steady, sensible voice of independent Primedia Broadcasting on the Medium Wave. The rock on which several upper middle class South Africans can depend. I don’t listen myself, but if I was 70, I would, because they’ll tell you exactly what’s going on in a no nonsense fashion – just like in the 1950s. Not the 1950s here, obviously: there was plenty of nonsense happening then. No, the 1950s in good old Blighty where you knew where you stood and people were polite and frank and honest – and didn’t subscribe this this kind of BS: 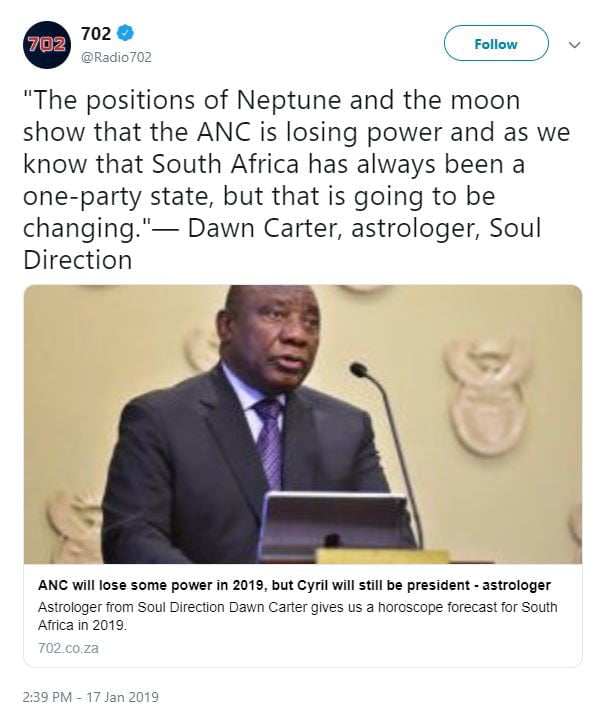 Woowoo peddling is obviously to be expected from some sources out there, but maybe you’d assumed you’d get better from Radio 702, because you thought that they were more highbrow, more discerning, more intelligent.

They’re not. They’re just as bad as all the others and if you choose to accept this from them, then what other compromises are you willing to make whiling away the daytime hours with their smooth-talking disc jockeys? And why?
Honestly, if this is an example of their political insight, surely just head to the Daily Sun for your election news? At least there you know what you’re getting and there’s no pretence about being all la-di-da and genuine.