I have no idea who Reno Omokri is [could have looked it up; didn’t]. I knew that Australia was further east than America though. And I was aware of the approximate average gestation times for elephants and rabbits (other mammals are available). But I’d never seen it written down before. 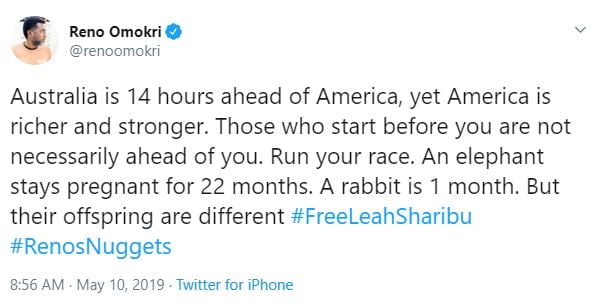 Reno has hit the nail on the proverbial head with this tweet. Those who start before you are not necessarily ahead of you. Well, I mean, technically they are. At least until you start. But actually even then they do kind of remain ahead of you in time zones. That’s basically how time zones work. So yes, run your race, but accept that if you start that race 14 hours behind someone else, it’s unlikely that you’ll finish first. Unless you’re America, obviously.

There’s no denying that a rabbit’s and an elephant’s offspring are different though. One small, fluffy-tailed, leoprine. The other, an elephant. That’s the difference that staying pregnant for 22 months versus 1 month will give you. Well, that and the species of the parents. And to be honest, I think it’s mainly due to the latter.

But it really does make you think, doesn’t it?