…but wouldn’t want to miss out on sharing a few pictures from this morning at the Waterfront. It was a visit prompted by half the family volunteering at the Woof Project (including Puppy Duty): 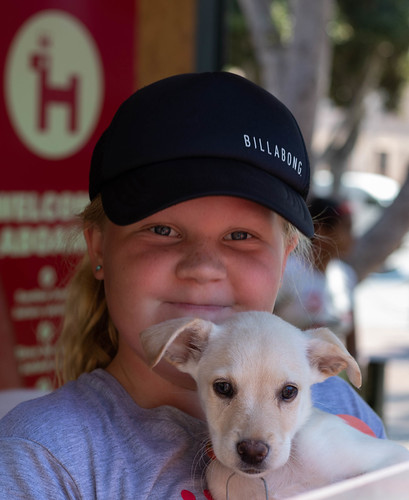 The place wasn’t as busy as you might think and so we had a wander, had a drink or two, had a very nice burger or three, and took a few photos. 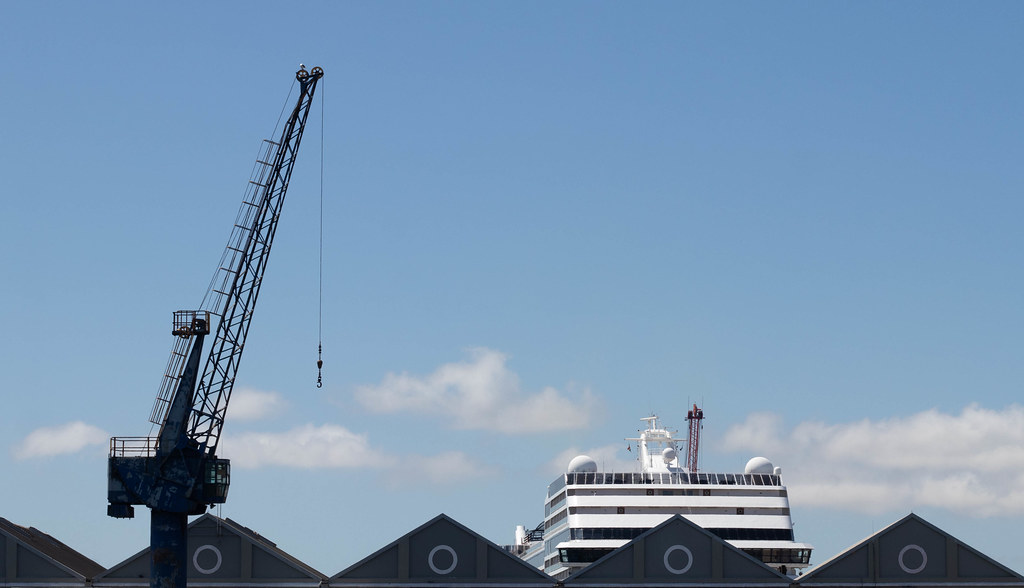 If I remember (you can remind me if you want), I want to try something a bit different with one of the pics. But right now, there’s a pile of Kameeldoring turning into beautiful coals, and a nice cold Black Label both awaiting my immediate attention outside.

A quick trip down to the Waterfront on Friday made for some happy children and a leisurely afternoon. We pulled in at the Foodmarket for lunch, and it was while we were sitting outside that fine establishment that we were visited by this individual. 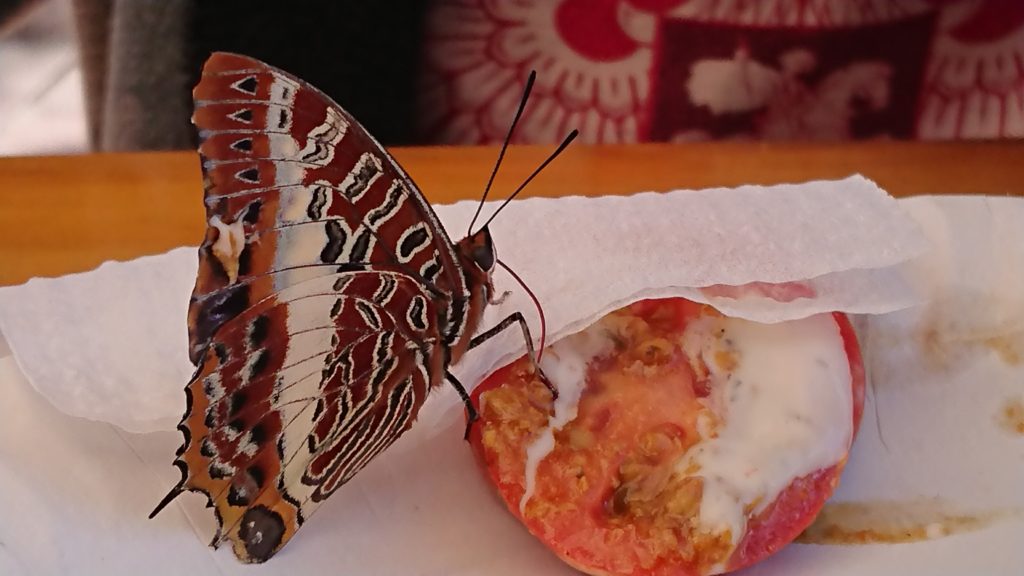 Now, I’m no expert on insects, but I was pretty sure that this was a butterfly. I just didn’t know what sort. A quick visit here:

led me to believe that it was a Charaxes spp. but I wasn’t sure which one, given that none of them seem to be Cape Town residents. So I went to iSpot, where I described the situation thus:

Lunchtime in Nobel Square, V&A Waterfront, Cape Town, South Africa.
The boy doesn’t like tomato, and removes it from his otherwise delicious ciabatta.
It’s instantly pounced upon by butterfly, which enjoys the tomato and creamy sauce thereon.
Hung around for around a minute and then flew away.
Tomato left mostly intact.

Because that was pretty much exactly as things happened, and the experts there told me it was likely a female Whitebar Charaxes (Charaxes brutus subsp. natalensis).

…which can be found on Page 61 of that SANBI checklist and which is described therein as:

Takes one to know one, I guess. It also mentions that it likes to go after red flowers. And tomato is red, so I guess this all fits.

I now know one more species of local butterfly, so I won’t have to ask next time I see one of these.

Keep it simple, stupid. Just say what you mean. It’s a meeting, you’re not “touching base”. You wrote someone an email, you didn’t “reach out” to them. You finished that report, you didn’t “close the loop”.

I’m instantly wary of people using management speak. They’re trying to hide something, whether it’s their innate stupidity, a lack of self-confidence, or some bad news. That’s why I was suspicious when I saw this update from the Cape Wheel at the V&A Waterfront:

“Restructuring your ticket options”? Those options being an adult ticket or a child ticket. That looks very similar to what’s currently on offer. That’s not “restructuring”, that’s “applying a non-varying approach”.

What has changed then, as beagle-eyed readers will already have noticed, is the price. Here’s where we stand currently: 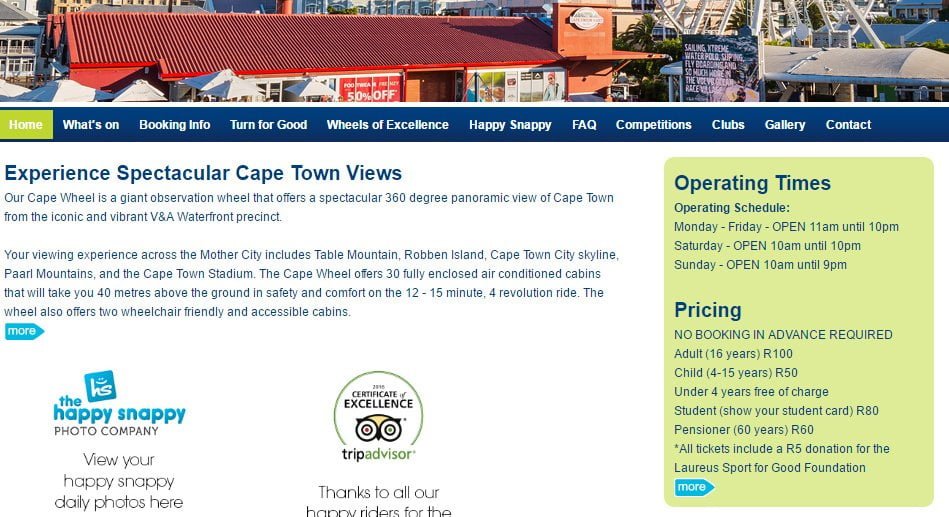 And “focussing in on the paramount datum”:

We learn then that basically, “restructuring our ticket options” actually means increasing the prices for a ride by an impressive 20%.

As an aside, inflation in South Africa is currently running at 6.4%.

So that’s a pretty hefty restructuring.

In the spirit of these linguistically disguised augmentations, I’ve just told Mrs 6000 that I’m going to be “restructuring my alcohol consumption options” over the summer holidays. The beverages of choice will remain wine, beer and brandy, so I guess that – like the Cape Wheel’s ticketing options – some other  variable (see comments below) of the alcohol consumption will have to change.

I wonder what that could be.

Meanwhile, at the Waterfront, the left lane on Dock Road is reserved for specific vehicles:

The only problem being that the accepted plural of the word ‘bus’ is ‘buses’. That’s not to say that the erstwhile road painters are entirely incorrect though, merely that they are wildly out of date:

In 21st-century English, buses is the preferred plural of the noun bus. Busses appears occasionally, and dictionaries list it as a secondary spelling, but it’s been out of favour for over a century. This is true in all main varieties of English.

As I mentioned yesterday, visiting Ye Olde Aquarium was on our list over the weekend, before catching the last stagecoach home.

Not quite. But almost.

Incoming from the Two Oceans Aquarium (where we’re going on Saturday) – there’s been an invasion of isopods.

Isopods refer to a group of crustaceans that include terrestrial and aquatic species like woodlice and rock lice. Some isopods eat decaying plant and animal matter, others graze on food particles from the water around them, a few are predators, and some are internal or external parasites.

Also, my dodgy Latin says they all have the same number of feet. Or something.

You can go and have a look at the photos of this rather extraordinary “bloom” on the link above. there are an awful lot of them (Isopods, not photos). It’s fascinating, but apparently it does cause some issues for the aquarium:

Much of the water for our exhibits is from the harbour surrounding our building, and we’ve had to shut down our intake pipes. Once all the isopods die off – also as a result of oxygen deprivation – they will sink to the bottom. Then, once oxygen levels go back up (because there are fewer organisms in the water using this oxygen now) the dead isopod bodies will start decomposing like mad. This will cause an ammonia spike in the water, making the water toxic to the animals in our exhibits and so still not suitable for our use. We will be keeping the Aquarium’s life-support system on a closed system until the water quality returns to normal.

I’m not sure how long the aquarium can keep their life-support systems off, but if it’s anything like the Starship Enterprise (spoiler: it’s not), then I don’t think it’s very long at all before the guy in the red shirt suffocates. Hopefully this won’t be the case at the aquarium, because it would be nice to not have to step over dead bodies as we’re having a look round on the weekend.