I’m booking train tickets for a lightning quick visit to the UK, post the Cast In Steel 2016 visit to Bergen in May. And they’re expensive.

Of course, everything is expensive when you look at the tragic state of the South African Rand, but travel – especially train travel in the UK – is stupidly, near prohibitively, expensive.

But what are you supposed to do? You can’t walk.
Last time, with Mrs 6000 and the kids with me, it made more financial sense to hire a car and drive up the M1. And that’s 260km with petrol costing R24 an litre. Still pricey. But with just me going, that option seems less financially viable this time around.

It’s not just me though. Infamously, last month (as infamous as something that recent can be, anyway), Jordon Cox, aka “The Coupon Kid” travelled from Sheffield to Essex via Berlin – included a day out in the German capital – and still saved money. 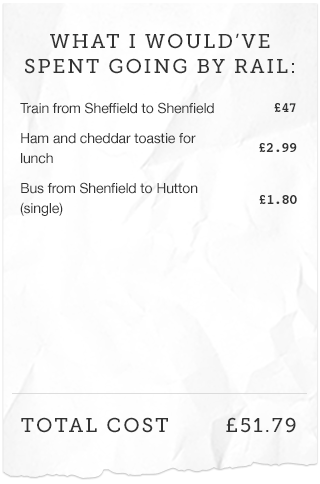 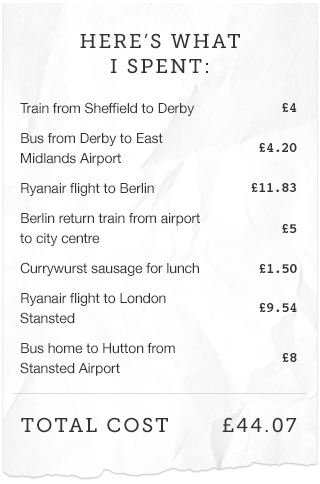 Although his money-saving achievement was somewhat overlooked by The Guardian whose main concern was that it wasn’t environmentally friendly. Missing the point, much?

And then there was this, with the argument around football ticket pricing becoming a bigger and bigger thing: 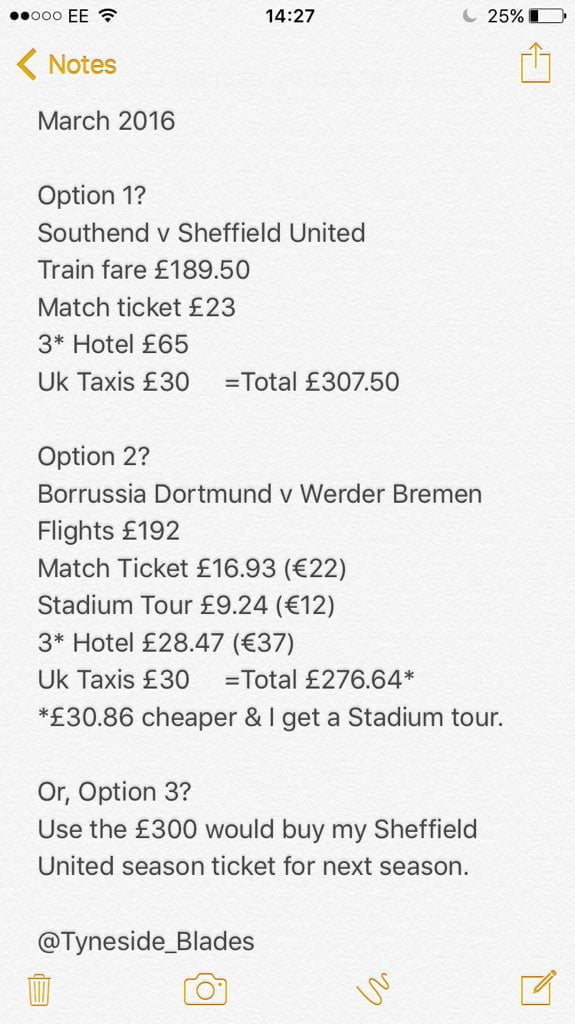 And yes, maybe Mr Tyneside_Blades (if that is his real name) could choose a cheaper (and almost certainly far more enjoyable) hobby than watching Sheffield United, but saying that is merely employing Guardianesque diversion tactics. (Incidentally, someone had a go at that here, and was summarily defeated.)

So I looked, but I couldn’t find a suitable route via Germany. *sad face*

I did find one via Dublin though.
And here’s my maths (no, I don’t have time for stadium tours or a ham and cheese toastie): 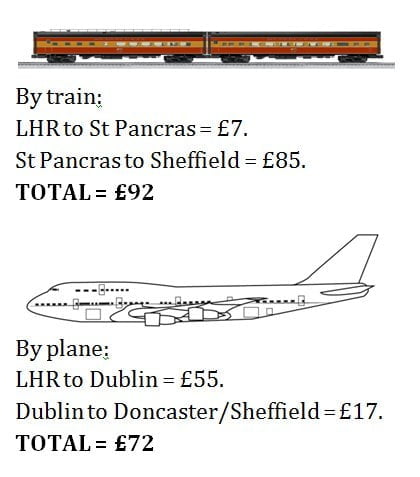 My plane from Bergen arrives at LHR, so that’s my starting point for either journey. I don’t get to leave the airport at Dublin, so I won’t spend anything at the Guinness Brewery, and my Dad will pick me up from station or airport, so that bit is for his account, (but ok, for the record it’s basically 5 miles to the station and 25 miles to the airport).

A few other points:
Yes, this includes all taxes, and a minimum of 20kg luggage allowance for the planes. Heavy.
Yes, I have to allow about 3½ hours for the train journey, while the flights would take about 6 hours. Time.
Yes, the train would be more environmentally friendly. Smoky.
No, despite the graphics above, I’m not expecting to travel by Pullman Coaches or Boeing 747 on these journeys. Inaccuracy.

I probably won’t end up doing this, but the point is that I could. And it simply doesn’t make sense that I could.

I’m not really sure who to complain to about the whole thing though, so I just wrote a blog post.

Thanks for reading it.

I like this. It’s one of those Neil Freeman data visualisations. Here are the 140 “high capacity, grade-separated heavy rail” systems (city metros) of the world, all neatly put together on one handy image, from sprawling Shanghai: 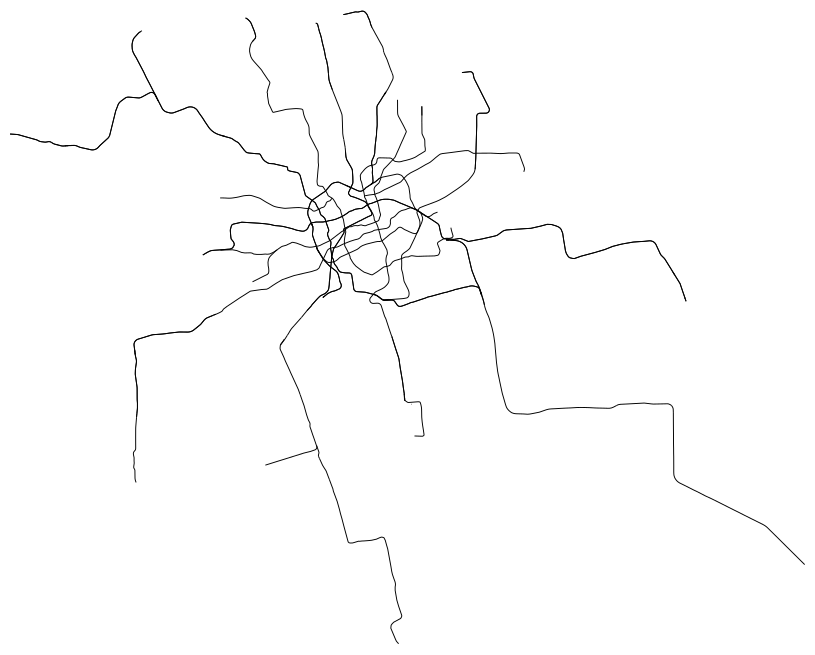 Worst. Metro. Ever.
Looks like an unravelled Ebola virus.

And once they’re all listed in order, it looks something like this:

You can find out more details and even buy the poster for your subway-themed office wall here.

This brought my family back to me this afternoon. 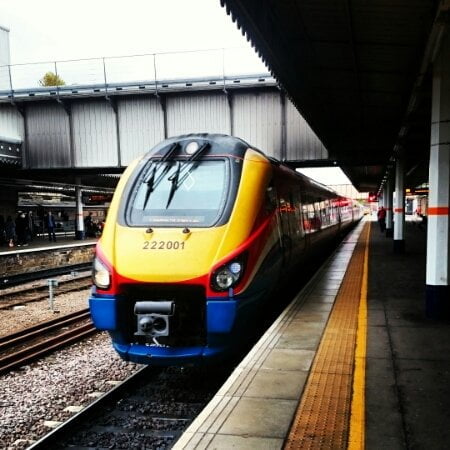 It’s been a difficult couple of weeks without them, so it was great to see them all again.
They were pretty tired after the journey over from Cape Town, but exposure to the er… “cool” Yorkshire air as the train doors opened soon woke them up.

Off back up North and currently doing 200+kph on East Coast Mainline. 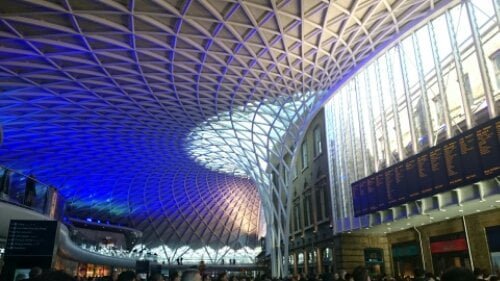 Having left Kings Cross station and its amazing roof inside a roof behind, we’re belting through the Cambridgeshire countryside (it’s nicer than Leicestershire) and being amazed by the number of wind turbines. Yeah, we’re really easily amazed.

This train does London to Doncaster in about 90 minutes. The journey the other way took over three hours. That’s what stopping 11 times does for you. That said, on the way down we were on schedule. This one is running a few minutes late, which wouldn’t be too bad if we had more than a few minutes to change to our Sheffield train once we get there. Could be tight.

Tomorrow: Sheffield United v Walsall.
Tonight: Russell Howard at the Arena.
And yes, I need to upload some photos.

Three hours (and four minutes) from Sheffield to London on board an East Midlands train would maim anyone through boredom. But with two kids in tow, it’s a killer. And the scenery isn’t exactly riveting through Leicestershire: power stations, wet fields and dirty horses. Then, to add insult to injury, you end up in Bedfordshire, which seems like some sort of post apocalyptic wasteland.
Suddenly, Leicestershire seems picturesque.
There’s a tip for the Leicestershire Tourist Board, right there. Compare yourself with Luton.

There’s a French Bulldog just across the aisle from us. It’s off to a French Bulldog meet in London. It has its own Instagram account. It’s standing on the table that people need to eat their food off. Ugh.

Nearly there now. Just passing through St Albans. Also nicer than Luton. I’m going to go and help my daughter colour in Spiderman now, so I’ll be back later. Sorry for the rambling, but it was surely worth it for that Leicestershire tourism tip. Right?