Or anywhere else, actually!

Remember the groundbreaking video for a-ha’s Take On Me? Of course you do – it was groundbreaking – the best video of the 1980s. Way up there in the Top Ten best music videos ever. Really good and groundbreaking.

Look how real life dives in and out of pencil-sketched life. Just like in the original video. They’ve even managed to get those nasty thugs with their pipe wrenches into the mix.

AR has many wonderful applications, but putting us into our favourite popular music videos was one that I hadn’t really considered until now.

Ag, you must know what’s coming. Yes, it’s ANOTHER cover version of a-ha’s biggest hit* Take On Me, this time by Brooklyn Duo and Ensemble Connect.

You’ll note a violin, a viola, two cellos, a double bass, a piano (big black thing at the back), a trombone, a bassoon and a very enthusiastic clarinet.

Lovely version, and a hat-tip to whoever tied in Magne’s keyboard solo to  Nikolai Rimsky-Korsakov’s 1899 Flight of the Bumble Beagle.

I have now heard 261 cover versions of this song, but this one is a real original, and must rate somewhere in the top 10.

Here’s a Facebook ad for an upcoming show at the musical theatre beyond the Boerewors Gordyn. 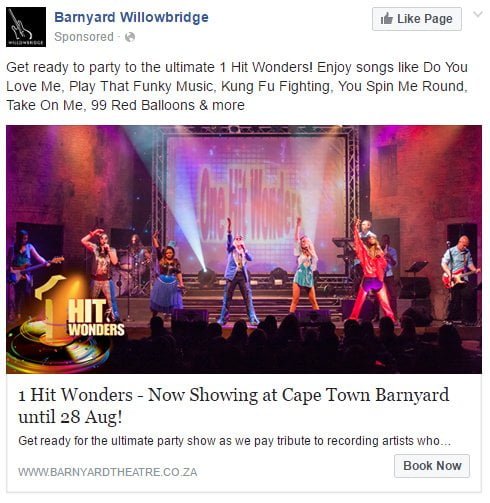 Let me help you out with the (not so) small print:

Get ready to party to the ultimate 1 Hit Wonders!

Enjoy songs like Do You Love Me, Play That Funky Music, Kung Fu Fighting, You Spin Me Round, Take On Me, 99 Red Balloons & more

Remember those songs? Of course you do. The Contours, Wild Cherry, Carl Douglas, Dead or Alive. They gave us such memories, and then they disappeared without trace. Likewise Nena and her red balloons (if you ignore her MASSIVE success in Germany) (which they clearly have).

Let’s compare: Carl Douglas hit the top of the charts with Kung Fu Fighting back in 1974. He was NEVER heard of EVER. AGAIN. He disappeared as fast as lightning. In fact, the way he vanished was actually a little bit frightening.

Now, I’ve nothing against Carl. His name will live on in the Hall of Fame through cheesy discos and pub quizzes forever more. And fair play to him. But…

Let’s have a look at a-ha: Take On Me was a number 2 hit for them in October 1985.
Just two months later, they released The Sun Always Shines On TV.
It went to number 1, clearly making it a bigger hit than Take On Me.
But whether it was bigger or not is actually beside the point. It was also a hit. A second hit.
This ridiculous success immediately ruined a-ha’s “1 Hit Wonder” status, a status which had only lasted for about 60 days. The further 7 Top 10 hits which they then went on to have over the next 30-odd years also kind of cemented their reputation as clearly not being 1 Hit Wonders. For me, at least. And everyone else with any sort of rudimentary intelligence.

And yet they’ve been dumped in with Wild Cherry and The Contours.

Look, I’ve been to a show there before and it was slick, professional and fun. I’m sure that this one will be as well. But underlying the whole production is the sickening inaccuracy I have described above. If you’re going along, I suggest that you try to overlook the invalid and plainly false information on which the entire show is based.

Because any other approach would surely ruin your experience.

Many of you won’t remember Matt Hales’ 2002 hit Strange and Beautiful until firstly, I point out that he recorded it under the name “Aqualung” and secondly, you hear it.
And yes, it was truly bewitching. But then he did this – a cover of a-ha’s Take On Me – and it’s utterly, spine-tinglingly beautiful.

I don’t know if Magne watches Grey’s Anatomy, but he does like the song:

I think Matt Hales is a very talented writer and performer, and have personally been much inspired by his Aqualung project.
Of the many covers done of take on me over the years, this one is perhaps the furthest from the original, and in my view therefore the most interesting.

And you know what? I’ve got 15 different cover versions of Take On Me on my iPod and I’m with him on this. Very special.

But then I can hit that high note too.