via my Dad, a link to this site.

The 25 Most Dangerous Cities In The World For Travelers

And yep, there’s Cape Town, in at number five, brushing shoulders (and soldiers?) with war zones across the Middle East and drug cartel hotspots in Central and South America. ¡Ay, caramba! 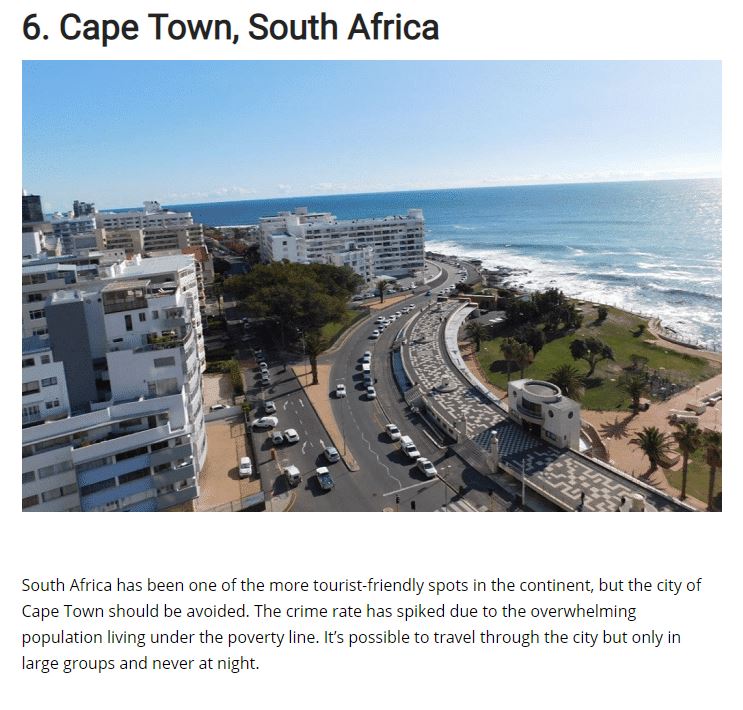 One of the other major issues in Cape Town which isn’t mentioned above (although which is actually clearly visible in the shot) is the fact that the horizon slopes wildly from right to left here, and there’s a very real danger of falling off the side of the world. This is an concern of which the local residents are well aware – that’s why a lot of us drive 4x4s for the extra grip – and not one that affects any other city on the planet.

For the record, I did travel through the city alone and at night just yesterday, and I’m still here, but it’s clear that this was solely down to good luck, much like every other time I’ve done it.
Incidentally, the photo above, of Sea Point was clearly taken by a very tall person under safe, controlled conditions: in a group and during the day.

No-0ne is denying that crime is a problem in SA, although the statistics certainly don’t back up this alleged “spike” in the crime rate. You’ll miss out on an awful lot by avoiding Cape Town (although not so much by just avoiding it at night and alone), and I’m happy to report that both official numbers and anecdotal evidence suggests that very few people have taken notice of this silly list.