Some say that one local blogging microbiologist used to perform basic scientific experiments in his bedroom cupboards aged 11. All I know is that I never pulled a Blu-ray burning laser from its rightful home and mounted it inside a hollowed out flashlight, before shooting it at 100 sacrificial balloons.

Fortunately, this guy has pulled a Blu-ray burning laser from its rightful home and mounted it inside a hollowed out flashlight, before shooting it at 100 sacrificial balloons. And he caught their demise with a video camera, thus:

He even makes them come back to life again (but not really, it’s just the film played backwards).

Brian Micklethwait has been prolific of late, for reasons detailed at the bottom of this post. That’s great for people like me, who enjoy his narrative style of blogging: I really like hearing about why he took the photo he took, what he likes about the photo he took, and why he was where he was to take the photo he took. It makes you feel involved, like a part of the story.

Last Thursday, he was on the new upper concourse at Waterloo Station in London (because he needed to use an ATM) when he noted (and photoed) these two billboards: 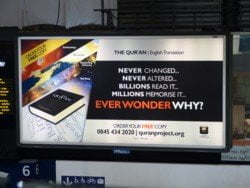 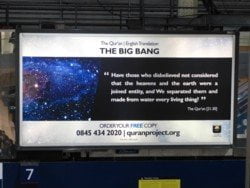 And he has responded to them. Rather nicely too, I think.

I was reminded of Dara O’Briain’s “Science knows it doesn’t know everything; otherwise, it’d stop” quote in Brian’s answer to the first question:

Science… has changed over and over again.  And this is a sign of science’s intellectual seriousness and intellectual vitality.  Lack of change, century after century, signifies the opposite.

There’s more, so go there and read, but I particularly liked this bit from his thoughts on the second ad:

The good news here is that the claim that the Qur’an is as scientific as real science is a huge concession to the acknowledged intellectual superiority of science.  “We have been right all along, and science proves it!” But if they really thought that the Qur’an was the last word on everything, they wouldn’t be dragging science in to back the claim up.  Science would be ignored.

Yes, good point. What exactly is the quranproject’s gold standard then? Are they really claiming that the fact that “we were here first” negates scientific theory? Or are they suggesting that scientific theory proves them right?

Either way, as Brian points out, comparing verses in the Qur’an to science’s version of the origins of the universe surely tacitly grants the latter a huge degree of legitimacy in their eyes, which is either a big step forward or a bit of an own goal.

Thanks to regular reader Paul Scott, who sent me these: 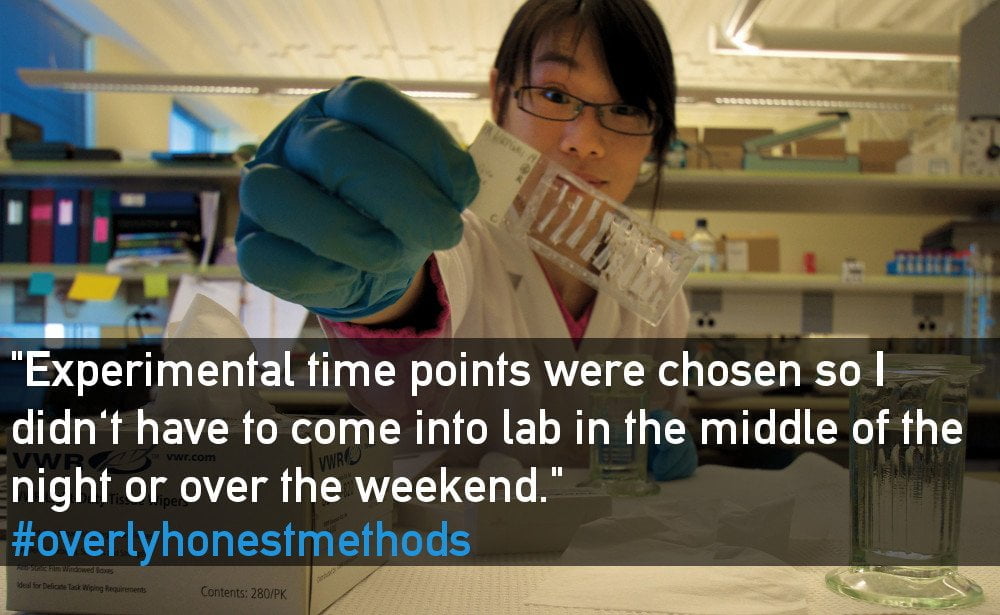 a random selection of “confessions” made through the twitter hashtag #overlyhonestmethods placed on random images borrowed via Google image search.

I’m guessing that all of my scientific readers will identify with at least 90% of them. 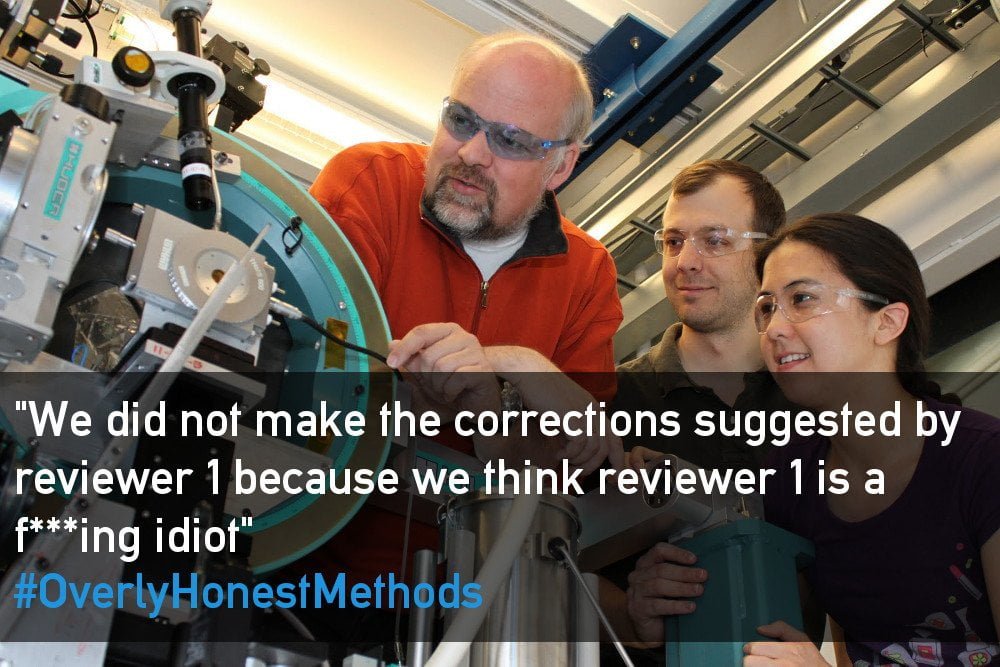 Only ever behind closed doors though, right? 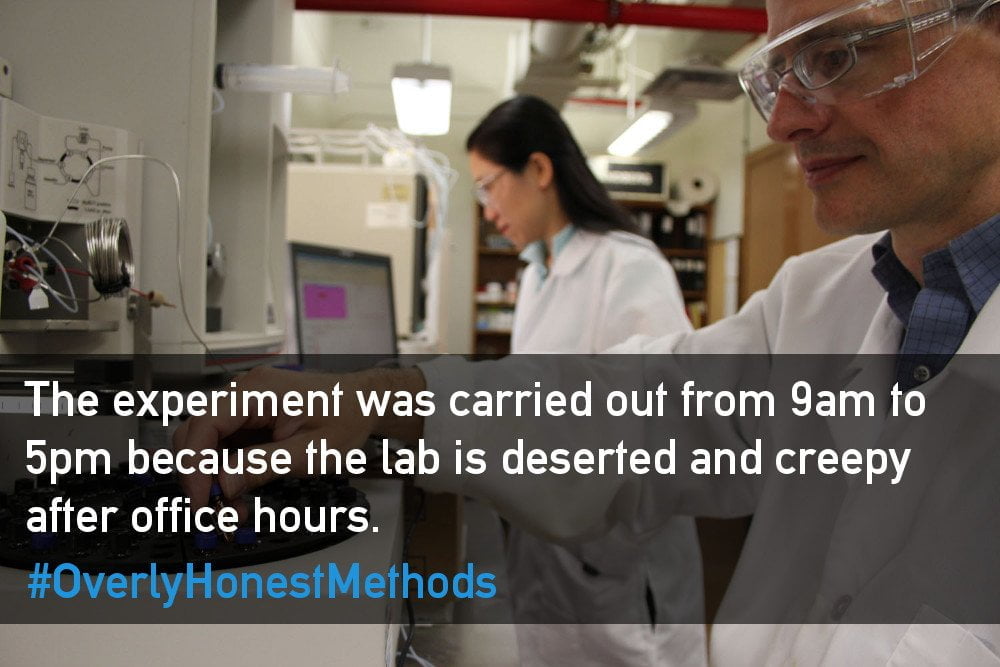 Yes. Amazing how every shadow is a ghost/monster/potential assailant when you’re processing a CSF in an empty laboratory at 2am.

We’ve done up the guest loo. Replaced the basin and the pan, stuck some tiles down on the floor.

Oh, and we painted the walls as well. That was done yesterday and thus, the house smells of paint. You know about the smell of paint. It’s not a pleasant smell. Chemically. Painty.

Fortunately, Mrs 6000 has a “secret” “proven” way of getting rid of the smell of paint, which is backed up by many links on the internet.
You’ll therefore note that it’s not actually “secret” at all. Nor is it “proven” in any way, shape or form.

It involves chopping up several raw onions and leaving them in the room which has just been painted. The scientific theory behind this method goes (and here I quote):

I don’t know how it works, but it just does.

Well, fortunately I’m here and I’ve brought along Science to help with the nitty-gritty of the chemical processes involved.

Firstly, we need to look at the differences between a neutralising agent and a masking agent. It’s pretty straightforward, because these sensibly named agents either neutralise an odour or hide (mask) it behind another odour. Simples, ne?

Ideally, we need a neutralising agent here – some chemical that binds to the VOCs (Volatile Organic Compounds) which cause the paint odour and thus render them less volatile and less odorous.

Congratulations. Your house now smells of paint and onion. You’ve effectively doubled the number of unpleasant chemicals in your breathing environment.

If you’re going to use a masking agent, rather use something which at least smells nice. It’s not like you’re going to come home, notice that your house smells of paint and think:

I know, I’ll defaecate in the corner of the living room; there’s an idea which is sure to make the paint smell less obvious.

I can’t decide if the tears in my eyes this morning were from the sheer lack of science involved in the whole chopped raw onion thing or the propanethiol S-oxide widely circulating around my home.

This whole issue has been compounded by the fact that the said bathroom window faces south, so opening the window to ventilate the room merely allowed yesterday’s howling southeaster to come through said bathroom, pick up the combined paint and onion smell and distribute it liberally around the rest of the house.

My wife and I have been married for nearly 8 years now and we’ve done a lot of painting, so we’ve also “discussed” this onion idea on several occasions previously and I’ve had very little success (absolutely none, in fact) in getting her to stop it. Thus, yesterday evening, as she headed for the vegetable drawer, I sensibly kept my mouth closed and left her to it.

And then for the rest of the evening, I wished that I could do the same with my nose.

“The Lay Scientist” Martin Robbins opens the sluice gates of his reservoir of satire and lets the contents loose on the Guardian website:

And I can’t really do it justice here – you have to read it yourself by clicking the link above. Suffice to say it’s damn accurate – in fact, the only bit it really omits is the blatant scientifically incorrect statement somewhere within the article.

Even the commenters are getting in on the act: