South Africa might be falling apart at the seams and the UK might be collapsing under the pressures of Brexit, but at least America is leading the way in… what?… oh cock.

The situation over there is why even the usually apolitical Magne Furuholmen has chosen to release a song, sharing his thoughts on the US right now. This are it:

He popped it on his personal Instagram to begin with, but it was more popular than he thought:

wowaweewah…thank you for an overwhelmingly kind response, people!
i woke up yesterday to a record-label in a panic over my insta(nt)-release.
they’re now scrambling to get the track out on other platforms, so stand by for more info as and when i get it – in the meantime, enjoy the exclusivity!

That’s why it’s out all over the place now. It’s upset a few people – all of them Americans – but that is the nature of free speech and incisive political comment.

And I know it’s about the current state of America, but:

“No bridge across divides; a drunken joyride,
With a monkey at the wheel…”

…really does seem to sum up a lot of the planet at the moment.

Further to my post yesterday and my ongoing and increasing disillusionment with anything political, be it British, European or South African, this fits so nicely. 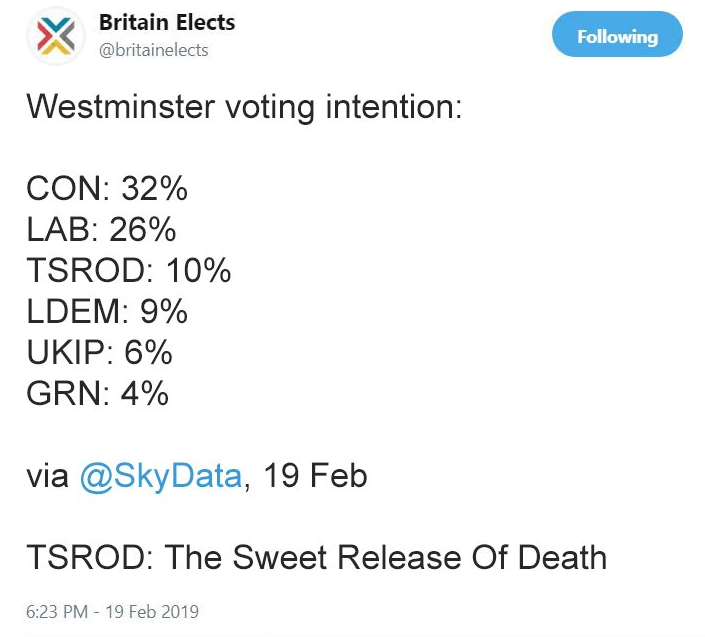 To be honest, the only reason that TSROD isn’t sweeping the board is that it’s clearly a new option which people haven’t considered before.
If you offered the average individual on the street The Sweet Release Of Death, they’d likely politely turn you down.

It’s only when you offer them the choice between The Sweet Release Of Death and any of the political parties on offer that TSROD suddenly becomes such an attractive option.

I’m a great believer in being positive. Not to the exclusion of all reason: I’m a realist before an optimist, but I’m very much an optimist ahead of a pessimist. So with that said, I’m both hopeful and not ever so hopeful about the year ahead for South Africa.

Hopeful because I feel that the vast majority of people here are decent, honest and willing to work towards making this a better place.

Not ever so hopeful because the loony fringes of left and right are out to make any meaningful progress harder than ever.
And to be honest, despite their small numbers, they’re still in the pound seats right now. They have a miserable public to speak to, there’s an election coming up real soon now and a clear lack of leadership at the top of the two leading political parties, while the guy in third place – currently holding 6% of the vote – is happily directing matters via a seemingly sycophantic media hanging on his every rant.
The economy is in tatters, with the promise of more bad news to come in the months ahead, unemployment continues to increase, and the government seems unable or unwilling (maybe both) to do anything about any of it.
Our newspapers and news sites are filled with biased, puerile, inaccurate and sensationalist crap and yet still people read and believe every word. There are a million bandwagons lined up like free Ubers just waiting to be leapt upon and an increasingly depressed and desperate population needing a ride.

But despite all this, I still believe that there is hope. We just need to avoid being dragged down by the really dreadful stuff to the exclusion of all of the good things and good people that there are out there.

Clearly, that won’t happen. But it would be nice if it could.

And let’s also look elsewhere before we bury ourselves in self pity. Not that it improves our situation at all, but it’s not as though we’re alone in having struggled through the frying pan of 2018 only to be shown the fire of 2019.

So I completely accept that things are some distance from rosy as SA heads into 2019, but I don’t think it’s the cataclysmic end that so many people seem to believe it will be.

Unless I’m wrong of course, in which case, we’re completely buggered.

OK. Here goes. I rarely do “opinion” posts on the blog any more because there’s rarely anything I feel strongly enough about to be bothered to wade through mentions on Twitter, comments on here, insults flung at me on my journey to and from work and hate mail delivered to my home address three months later via the SAPO.

But I feel I need to say something.

I’ve been  watching the Cape Town water crisis with interest for a long while now. I’ve blogged about it an awful lot. And while “crisis” seemed a strong word 25 months ago when water restrictions were first introduced, we’re now staring down the barrel of a rather terrifying gun, with fewer than 100 days left until Day Zero – the day the taps will be turned off.

An entire city of 4 MILLION residents is going to run out of water in just 3 months time. And yet, a quick glance at the City’s Water Dashboard gives us this picture:

What, if I may be so bold, the actual fandango?

Just 39% of residents are using fewer than 87l water per person per day. That’s frankly appalling, and it shows a huge disregard and/or misunderstanding for the gravity of the situation.

You think that showering with a bucket is inconvenient? (It can be, I agree.)

But when Day Zero arrives:
There will be no water in your home. None.
Literally nothing will come out of your taps.

Want water? Go to one of the ±200 city-wide collection points and queue for it. 25 litres per person per day.
25 litres of water weighs 25kg, by the way. Transport that, mate. Every single day.

Businesses will be forced to close.
Closed business = no income = staff being laid off.
Schools won’t be able to open, creating a childcare nightmare for parents, and an educational nightmare for schools and students.

And Day Zero won’t last a day. The biggest misnomer since Pussy Galore, right there. Day Zero is when it starts.
Brace yourself for 3-6 months of no water supply.

Sadly, if scare tactics – or “the truth” as most people call it – worked, we’d already be doing a lot better than we are.

But I digress. This paragraph from David Olivier’s independent report on the current crisis has stuck with me:

Blame shifting, fault finding and panic are usual reactions to water crises all over the world. Some anxiety is good, as it motivates water saving, but blame shifting actually pushes responsibility away, and causes water wastage. The best attitude Cape Town’s people can adopt is for every person to do their best, together.

This isn’t a political post. Absolutely not. I have no party axe to grind. But it does seem to me that there is a blame culture which has flourished in recent weeks. People saying that this water crisis has been poorly-managed by the City.

My personal feeling is that they’ve done ok considering the lack of any precedent here and the 20/20 hindsight that their detractors are blessed with. I think any city, any government, any party would have struggled with the challenge of a 1 in 1000 climatic event:

And I’m always intrigued to hear what the critics would have done differently.

But those are just my thoughts. Other opinions are available.
And, as I’m about to point out, none of that actually matters anyway.

I think David is absolutely right: this blame game has given people a convenient scapegoat which in turn has led to them choosing to ignore what, in this situation, are very clearly their social responsibilities.

So here’s my plan.

Blame and anger don’t contribute to our water supply. That’s not how the water supply works.

If you want to stick it to Patricia de Lille, the City, the DA, the Provincial Government, the National Government or whomsoever, then next time your opportunity to vote comes around, you must do just that.
That’s how democracy works. Literally, the power of the people.

(Remember to choose wisely, just in case this happens again.)

But attempting to spite any or all of those individuals or bodies by refusing to cut down on your water usage is misguided and isn’t going to help anyone. Even yourself.

Spoiler alert:
Your political affiliations and opinions are not an excuse to not save water.

It’s time (it was time a long while back, actually) to put on your big boy panties, take a step back (and up) and choose to overlook the petty politics right now.
Deal with stuff that later.

Right now, collectively, we need to reach out to that missing two-thirds of residents who are still using too much water – the Day Zero denialists, the monied individuals in Bishopscourt, the Observatory anarchists, the tannies in Pinelands with their precious lawns, that oke in Durbanville that just doesn’t care – and rein them in. And if they want to moan all over the newspapers and social media and and and… about us doing it, well they must knock themselves out.
Just as long as they’re saving water while they’re doing it. Because if they don’t come to the party, we’re very definitely doomed.

I’m aware that this is pie in the sky thinking. I’m aware that if people actually cared about this situation, they’d be saving already. But just imagine if the residents worked with the City instead of pointlessly fighting the system (“pointlessly” because as I’ve pointed out – using water just because you hate the DA is a recipe for disaster), fiddling as Rome burns.

If you’re one of those individuals I’ve mentioned above, you’ve probably not read this far. But on the off-chance that you have, for the good of everyone: rich, poor, black, white, young and old please can you please start saving some water?

We need to pull together here. Or we’re all massively, massively buggered.

Our Dear Leader Jacob Zuma survived another vote of no confidence at the ANC NEC this weekend, despite the conveniently timed release of several (or more) emails detailing how his chums in the Gupta family are essentially pulling the strings that make the country work.

And yet, the important guys in the top echelons of his party still voted to keep him. And you realise that when they do that in a democratic environment (which is what the ANC NEC supposedly is) then the problem is with the party, not the president.

But let’s watch as those dissenters all fall dutifully in line again after this threat: 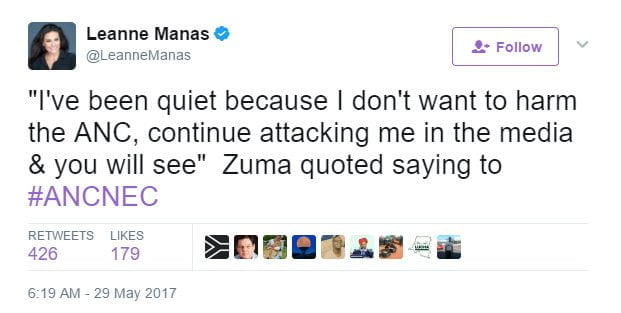 Meanwhile, the ex-leader of the official opposition and Lord High Empress of the Western Cape, with this HUGE open goal to aim at, is fighting with her boss about whether she can stay on for another term, given the alleged damage that she is causing to the party.

Thus – with a language warning in hand – please see this cartoon which illustrates the approach that many people will be taking towards the subject of politics today (and for the foreseeable future). 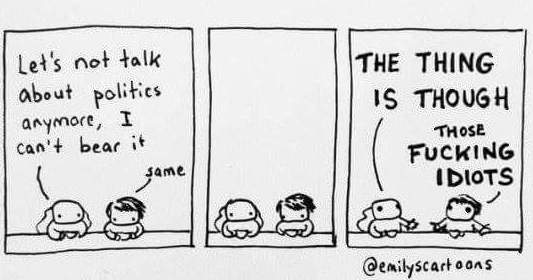 Really. Life would be so much more pleasant if we didn’t have to worry about these people who have been elected to serve us and whose salaries our taxes pay.