…was the somewhat ominous comment I put on this photo from November 2008. But there were no actual serious injuries that day. 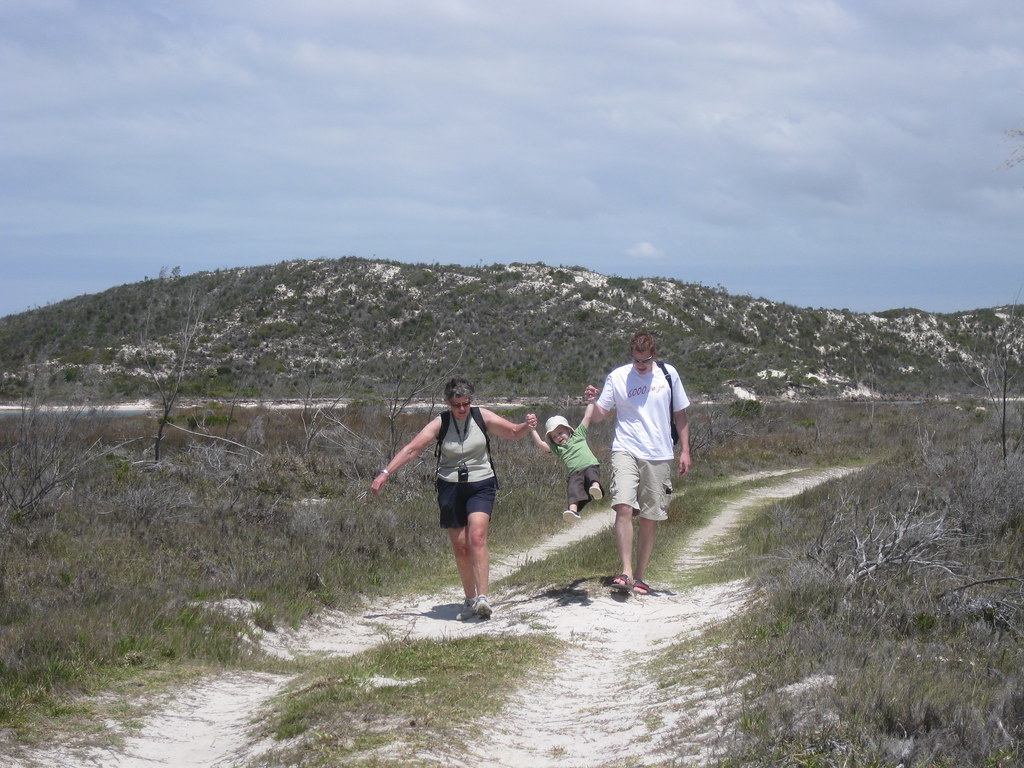 That’s little 0.6 being swung by my Mum and me at De Mond nature reserve down in Cape Agulhas. It was a blisteringly hot day, which is why 5-month-old K-pu was sensibly sheltering under a tree somewhere back at the car park.

For the record, Alex is now 11½ and his sister has just turned 9. Shoulder injuries and medical bills would be much more likely these days.

When someone close leaves your life, they’re never really “gone”. Memories, jogged by photographs or visits or sounds or dates – or whatever – are always there.

I could easily be walking along that sandy track next to my Mum right now: she’s counting up to 3, for Alex’s next short flight. We’re watching the terns take flight through the heat haze. We’re listening to the crickets in the grass. We should really have brought some more water along. It is – as I mentioned before – really hot. The still air is thick. Alex wants another swing.
And then back to the weirdest, dodgiest self-catering place in all of Arniston (possibly even in all of South Africa).

And this is just one moment, on one afternoon, on one day. There’s literally a lifetime of other memories, each just waiting to be accessed.
She’d want us to remember it all, from the mundane to the unusual. And I do. Most every day.

Ludovico Einaudi is the man for the job.

This could be a video about man striving to find God. It might be a portrayal of one individual desperate to rise above the clamour and chaos. Perhaps it’s both.

For me today, it merely represents the opportunity to stop and be at peace for 3 minutes.

This one is from November 2008. It features my 64 year old mother, with her artifical hip (thankfully not in shot) and artificial knee (in shot) approaching the top of the Lions Head. 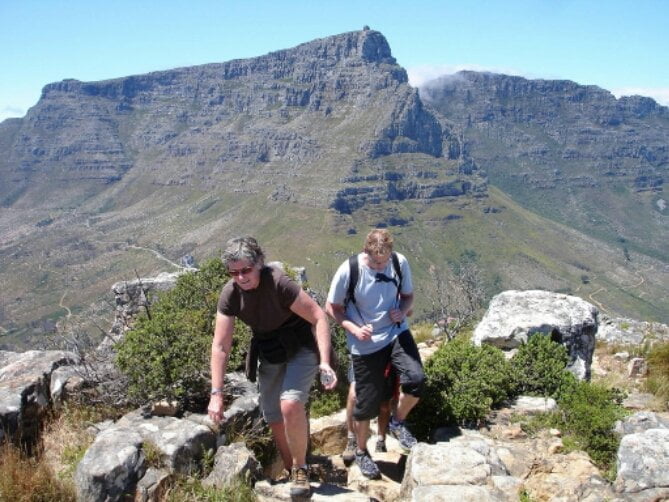 Despite my Mum’s fitness, this was a bit more of a test than she had anticipated – I think a lot of people think that because of its proximity to the city, and its bigger brothers (sisters?) next door, it must be an easy climb. Not so.
Mum made it up of course, although we had some entertainment and giggles with the chains that day. There’s a video somewhere of her sitting on my head as we tried to get her up them. It didn’t work, but it made for some great memories.

And thus, another season ended last night with Sheffield United crashing out of the playoffs after an astonishing 5-5 draw at Swindon. Since sore losing has been the major topic of conversation on the internet since Thursday evening, it’s probably fair to mention here that we were robbed by a couple of inexplicable refereeing decisions in the first leg. But there’s no point crying over spilt milk and conveniently, I think a fairer system of proportional representation will see us do better next season. Presumably there’s an online petition somewhere.

These sort of scorelines don’t come around often, and, given the rollercoaster of emotions that go with them, that’s probably a good thing. In fact, as far as I can recall, I have only seen one United game with 10 goals in it before. That was our 7-3 win over Northampton Town at Bramall Lane in 1982. That’s also the most goals I’ve seen United score in a single game. My dad was working that evening, so my godfather took me to the match (stopping at the corner shop for a quarter of mint rock on the way, obviously) and I got to tell Dad all about it when we both got home later that evening. Even at that early age, I could tell he was absolutely fine with missing such a memorable game. Not a problem. All good.

There have been a couple of games I can remember with 9 goals in them too: our 6-3 win against Leyton Orient in 1984 and our 5-4 win against Brighton in 1989. We were 3-0 up in that one, then 4-3 down, then John Francis got the winner in the 90th minute. And this is the moment in this post where I love the internet, because someone (from Brighton) has uploaded it onto YouTube:

The old Bramall Lane away end. The Kop. Amazing. Thank you.

Anyway, having thought about the total number of goals, and that 7 against Northampton, I had a think about how many goals I’ve seen us concede in a single game. And it’s 4. Obviously, we have conceded more goals than that in a single game (last night is a depressingly excellent example), but not when I was there. I can remember three occasions I’ve seen this: the Brighton game above, (which we still won), a 4-1 defeat at Hull City’s Boothferry Park in 1983 – memorable also because they had a railway station behind one of their stands and trains kept coming and going during the game (maybe this was what our defence was watching too) – and then the biggest Blades defeat I have ever seen: the 0-4 against Newcastle United (featuring Beardsley, Clark, Cole, Lee, Bracewell etc) in the Premier League in November 1993.

I was living and studying in Newcastle at the time and managed to cadge a ticket for the away end from my parents. The game was on a Wednesday evening, and the weather was awful, as you might expect from Newcastle in late November. This was during the redevelopment of St James’s Park, and the away stand was more of a corner next to the infamous Gallowgate End. Standing only. No roof. Sub-zero temperatures and snow everywhere.
To set the scene, I should point out that the Newcastle University Microbiology Department Social Club had organised a visit to the Scottish and Newcastle Breweries just across the road from the ground that afternoon. Long story short, I had been left in charge of 25 students in the free bar for about half an hour at the end of the tour and carnage had ensued. Fortunately, fully expecting a late end to the afternoon’s educational activities, I had come dressed in my United shirt and scarf and was therefore now rather drunk and wandering around a wintery Tyneside in a red and white footy kit.

Because I worked at the pub just across the road from the ground, I was allowed to jump the queue outside (which went down well) and grab a couple more beers inside, hiding at the corner of the bar. There was a lot of good-natured “banter” from the Geordies (most of whom were regulars, to be fair) and I actually didn’t die, so that was nice.

Inside the ground, we went behind very early and, rather than continuing to witness one of the worst Blades performances ever, the travelling fans instead amused themselves with an entirely promptu snowball fight with the locals and cheering as the snow fell from the roof of the new Leazes End onto the Newcastle fans below.

That this game, despite the awful result (and the copious amounts of beer), is still so vividly imprinted on my mind surely indicates that there’s more to football than just what happens on the pitch, (although that is obviously a hugely important part of the experience).

That said, long distance relationships are always tough and supporting a League 1 club from 6000 miles… away is no exception. I’m gutted that we didn’t get promotion again this season, but I’m already stupidly full of hope for next time around (which, after all, is only 12 weeks away).

And so, the holiday draws to an end. Tomorrow brings with it work, bacteria, admin and meetings.
But what a break it’s been: family, friends, London, Sheffield, snow, real beer, a “proper Christmas” and some amazing memories being made.
And then, as the icing on the cake, a few days of excellent weather and relaxation down in Agulhas.
And then, as the cherry placed gently upon the icing on that luxurious cake, Sheffield United demolishing QPR at Loftus Road and our porcine neighbours losing out to a last minute winner at the Etihad.

Could it get any better?
Well, I could do without heading back to the lab tomorrow. But otherwise, no. It’s been amazing. 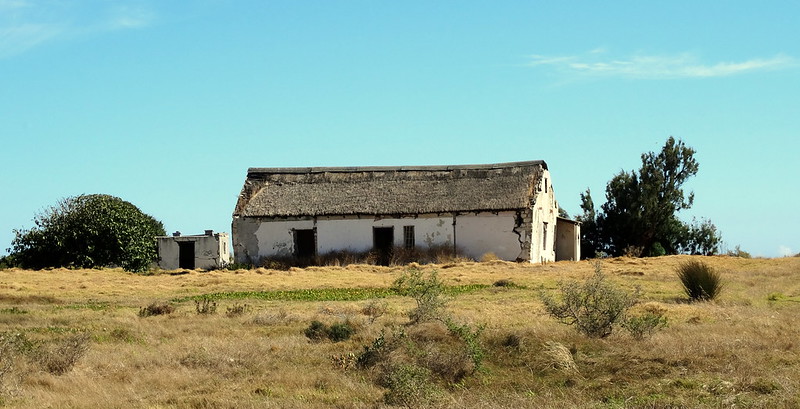 But in the meantime, for those who are interested, there are updated photos here and here.