There are people who have examined the complex politics of South Africa in minute detail and there are others who have studied the mining industry of the country for many, many years.
These people have earned the right to use the moniker of “expert” in their particular field.

I are not these people.

I can, however, like to venture my opinion on the current situation regarding the wage demands and negotiations surrounding SA’s gold mining sector. And my opinion is that I don’t think things are going to work out very well.

There are strikes, strife, usually a bit of violence and some threats. And then, after a while, and a lot of posturing, they meet halfway. Which would be 9% in this case. The overall increase just about enough to drive inflation up a bit further, but for the individual workers, not usually enough to make up for the pay they missed out on while they were striking. Perhaps the latter is why they then demand a bit more the next time around.

Of course, if I can work this out, then the employers and the unions are probably also aware of it. Thus, they come out with more extreme percentages as their starting points. Which brings me neatly back to current events in gold mining.

The employers – citing falling productivity, the lower price of gold and spiraling costs – have suggested 4%. Not a massive decease on their usual offerings, but then they don’t have a lot of space to place with. That’s not the case for the unions though. Although they have certainly outdone themselves – and each other – this time.

I’d like a pay increase too. 10% would be lovely. 4% would even be quite nice. But with this news, I’m tempted to hold out for 159%. And once I go for it, I will only back down ever so slightly (and maybe I’m guilty of showing my hand a little here, but no further than 158%).

But seriously, with the parties starting so very far apart, the upcoming mining wage negotiation are going to take a while. And all that time, tensions, frustration and desperation are going to increase. And just in case you have no memory, there is history here.

Colour me pessimistic, but I really can’t see this working out well.

Until we actually have hard facts instead of supposition and rumour, I’m steering well clear of the whole Lonmin/Marikana issue. However, if like me, you’re searching for those hard facts, it seems that the mainstream media isn’t the place to be looking.
There’s a surprise.

Whichever side you’re on, you surely can’t help but feel some pity for the rock drillers who – as we’ve been told here, here, here, here and here – earn just R4,000 per month. How one can survive, let alone support a family, on that amount is beyond me.

Except that Politicsweb has now alleged that the oft quoted R4,000 per month figure is actually some distance from the true amount earned by the Marikana rock drillers:

It was left, not to a journalist, but to Solidarity deputy general secretary Gideon du Plessis to go and find out the actual figures. In a statement issued on Monday he reported “The adjusted total cost package of a Lonmin rock drill operator is approximately R10 500 a month, excluding bonuses.”

In response to a separate query from Politicsweb Lonmin’s Mark Munroe Executive Vice President of Mining, basically confirmed these amounts. He stated: “Lonmin’s Rock Drill Operators earn in the region of R10,000 per month without bonuses and over R11,000 including bonuses. These levels are in line with those of our competitors and are before the wage hike of some 9% which will come into effect on 1 October 2012.”

If this increase applies to the whole compensation package it would push gross earnings – with and without bonuses – to between R11 000 and R12 000 per month. The net income of rock drill operators may well be considerably less than this – after deductions – but this is the cost to company.

If these figures are correct, it makes it even more bewildering, bizarre and tragic that so many lives were lost in search of what amounts to a R500 per month increase.

As the Politicsweb piece states:

One has to ask why no-one in the world’s media appear seem to have bothered to verify the R4 000 figure… Given the critical nature of this information for any analysis of the strikers demands it seems like a very basic mistake.

Meanwhile, South Africa’s news24.com seems to have evidence (via Al-Jazeera) that police were indeed fired upon before opening fire upon the protestors. The video is worth a watch.

I’ll leave the decisions as to whether R10,000 per month plus bonuses is an acceptable wage or whether the two shots apparently fired at police merited their response up to you. But wouldn’t it be nice if the journalists paid to report facts, actually reported facts? 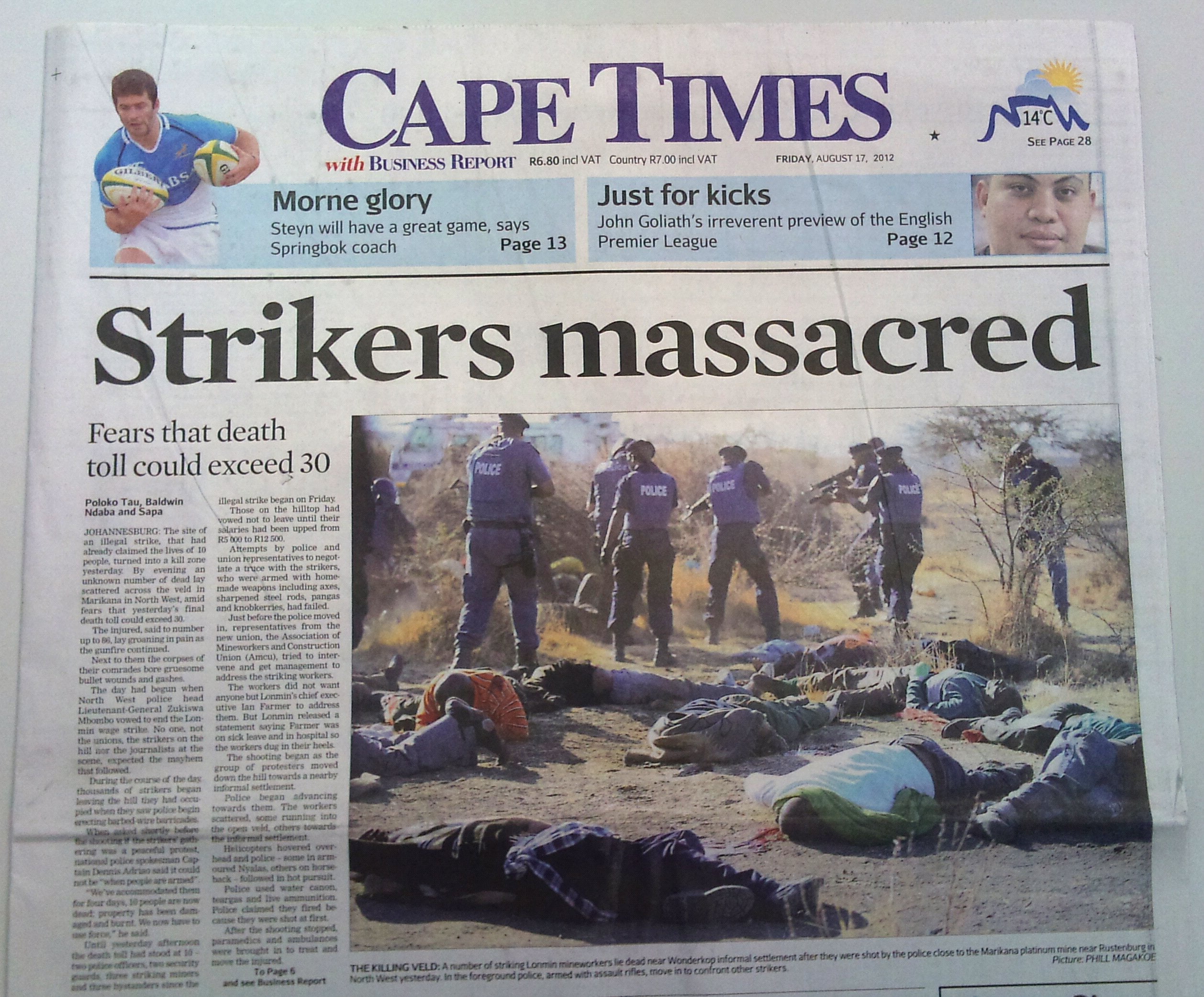 While facts are hard to come by and people are wildly speculating and accusing everyone of everything, it strikes me (no pun intended) that given the situation yesterday, we would either be looking at the headline above or something along the lines of “Police massacred”.
Was there another option? There surely should have been.

My feeling is that we shouldn’t be concentrating on what happened yesterday, more on the events over the previous weeks that led to the obviously untenable situation that occurred yesterday afternoon.