Eagle-eyed motorists will have noticed some new cameras going up on the N2 and the M3 in Cape Town. They’re on the footbridge at the Searle Street junction of the Nelson Mandela Boulevard in Woodstock, and then, heading further out of town, the footbridge on the M3 at UCT and the Main Road bridge over the Settlers Way bit of the N2.

I’m no expert in speed enforcement camera technology, but this has got ASOD written all over it:
Average Speed Over Distance.
What that means is that your number plate will be read by the camera and your journey from Woodstock to UCT (or Mowbray on the N2) and vice versa is going to be timed. Once they know how long it took you to get from A to B, it’s a simple matter to calculate how fast you were going. Since the speed limit on these bits of road is 80kph, if you average more than that, you’re going to be in trouble.

These schemes have already been used (successfully, we’re told) on the M5, the R27 and the infamous R61 near Beaufort West – the longest ASOD in the world at 72km.

Transport MEC Robin Carlisle’s office said: “Prior to the initial implementation on the R61 stretch from Beaufort West to Aberdeen, there had been a reported 509 crashes in total, 75 of which being fatal crashes resulting in the loss of 149 lives – this over the previous 12 years.
Since the implementation of Asod on the R61 stretch, we have received no reports of any fatal crashes on that stretch.”

And we were also told that this bit of road was one that they were going to be targeting in the future.

I don’t think that the rush hour traffic will be affected by this – you’re lucky if you can get up to 20kph, let alone 80. But that nice long hill down into town down Nelson Mandela Boulevard and the equally tempting dash down Hospital Bend on the way out are going to make this a big money spinner for the authorities out of hours.

Not that I’m saying that speeding motorists shouldn’t be prosecuted. Of course they should: they’re a danger to everyone around them. But given this quote from Carlisle:

“We’ll have a nice nanny state,” he said. “It’s going to be a pleasure to drive in the Western Cape once we’ve got these roads covered.”

I just wish that it wasn’t being done by such a smug twat.

Following this post and several (or more) attempts to get some sort of clarity on what exactly was going to be done to the M3 in Cape Town from our elected representative, I finally got an email from Michelle Talliard. Michelle is the Senior Secretary to the Director : Asset Management & Maintenance, no less.

The road works have begun but they are being done outside of peak hours.  The inbound section is being doing between 09h30 and 16h30 and the outbound section will be done between 08h30 and 15h00.  The Stop/Go is incorrect and will be removed.  There will only be single lane closures in each direction.  The project manager will follow up on the incorrect signage.

The works on the M3 will happen between the Trovato link off ramp and the Klaasens Road Bridge on both carriageways and between Bishopscourt Drive and Boshof Avenue on the inbound carriageway only.

Currently work is taking place on the inbound carriageway between the Klaasens Road Bridge and the Trovato Link off ramp.  Minor works are also taking place on the shoulder between Bishops Court Drive and Paradise Road, but these are not disrupting traffic at the moment.

That first bit – between the Trovato link off ramp and the Klaasens Road Bridge on both carriageways – is not actually a lot of road, as far as I can work out. Basically just over the brow of the Edinburgh Drive hill to the Chart Farm as you’re heading out of town. Still, take away one of the two lanes in either direction and it’s going to mean delays.

The second one – between Bishopscourt Drive and Boshof Avenue on the inbound carriageway only – is longer, but mildly confusing in that neither of those two roads actually intersect with the M3. But I think that they mean between the first set and last set of robots that you encounter on your way into town each morning.

Despite their efforts to keep it out of peak hours, it’s going to make daytime traveling a nightmare, so Rhodes Drive past Kirstenbosch would seem to be the obvious detour for inbound traffic and “something through Claremont and Kenilworth” for stuff heading south. Good luck with that one.

Lastly, if you’ve driven up Edinburgh Drive away from the city recently, you’ll have enjoyed the near-authentic off-road experience twixt Struben Road and the footbridge at the top of the hill. But it would appear that there is to be no rehabilitation work done to this bit of road, despite the fact they will be rehabilitating all around it.

I don’t make the rules.

Signs like this one have appeared all over Claremont and Newlands in Cape Town: 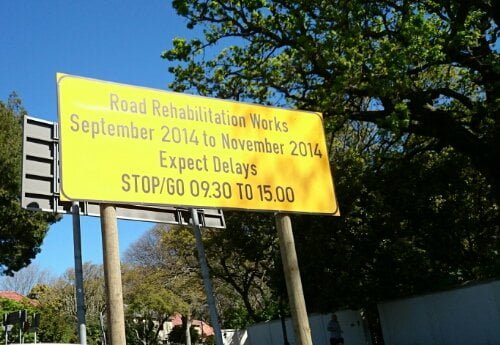 Some of them also bear the legend “Plan your route”. That’s all well and good as far as advice goes, but until they tell us exactly where and when things are going to be happening, it’s going to be quite a difficult thing to actually do.

The M3 is definitely one of the roads being rehabilitated, but these signs are all over the place: I saw one of them on Palmyra Road – which would surely be one of the M3 alternatives for people “planning their route”.

If the council are really going to rehabilitate both of them at the same time, they’re more stupid than I thought.

With the sudden end to the appalling weather, we took the opportunity to get down to Tokai Forest and work off some cabin fever.
Beneath the pine trees the ground was fairly dry and firm, but further down there was still pretty of evidence of flooding on the lower lying ground.

Wet and muddy, we found ourselves the end of the unfinished, unused Lismore Avenue road bridge over the M3 and I couldn’t resist clambering up and having a quick look up top. 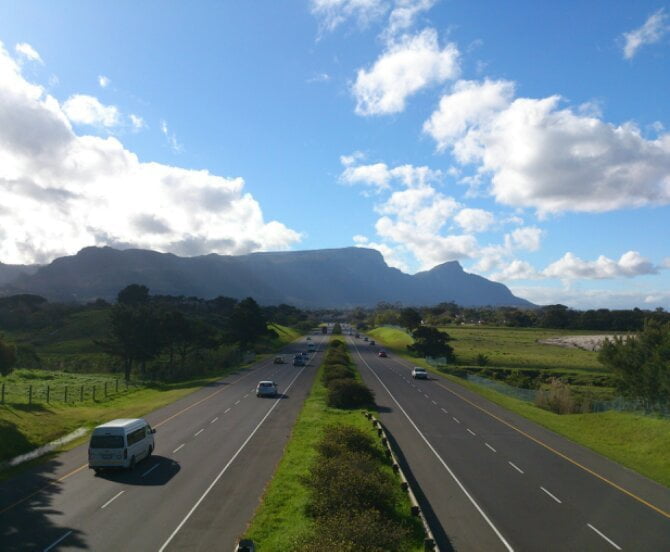 Looking North (above) and South (below) 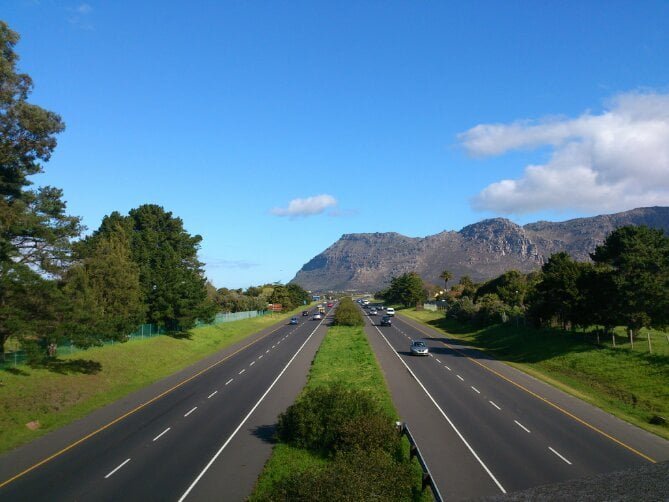 It wasn’t particularly pleasant up there – lots of broken glass and drug paraphernalia lying around, low walls and plenty of exposed metalwork to trip over.
That said, I will head back up there with a proper camera and get some better shots sometime. And I will find out why there’s an unfinished, unused bridge going over the M3 near Tokai. (Although, Cape Town is known for its unfinished bridges, of course.)

Since I’m stuck in the house with a small girl who is engrossed in Barbie presents Thumbelina for the 1000th time, I thought I’d chuck up a couple of quota photos. And today’s theme is road signs.

There are so many new signs going up around the city as part of the infrastructure upgrades for the World Cup (and beyond). Not that these ones will be replaced. Edinburgh Drive is still Edinburgh Drive and the M3 still goes to Cape Town.