It’s red wine, log fire and crossword weather. And while you probably can’t manage the first two at your desk at 9am, there’s nothing stopping you keeping your brain warm with the official 6000 miles… crossword for June:

(link if you can’t see the puzzle above)

This month’s offering is particularly easy. And if I’m saying that, then it must be REALLY straightforward.

We’re into June (cue comments of “where does the time go?” etc.) and Cape Town (last time I checked) is located deep (about 33 degrees deep) in the Southern Hemisphere.
The relevance of those temporal and geographical observations is that June contains our shortest day. And this year, much the same as every other year, June 21st has won through once again. [polite applause]

Note: I’m writing this on the morning of June 1st, but as I don’t know when you’ll read it, some of the tenses might be a bit off. What a tense situation (lol, geddit?) that may would have will been!

The days only get longer because the sun sets later. The sunrise continues to be at 0751 until June 24th and then gets even later (0752) until 5th July. However, this delay is offset by the later sunset to the extent that by July 8th, we’re back to a daylength of over 10 hours.

On June 21st, the sun will be 152.034 million kilometres from Cape Town, and while than might seem quite a long way away, we’re going to drift even further away until (again, obviously) the 5th July when we will be 152.092 million kilometres away. That might not sound like a big difference, but that’s an extra 580,000 km, meaning that the sunlight will take an extra 1.935 seconds to reach us on July 5th as it does/did/will have did on June 21st. I know you’ll notice/have noticed/have will did taked note.

As for Cape Town’s latest sunset this year: you missed it (or maybe you didn’t, but it’s gone already) it was 2001 on January 6th. The sun that day was “just” 147.101 million kilometres away. Light from the sun took 16.648 fewer seconds to reach us on January 6th than it will on July 5th. And light goes fast, hey?

Eskom has let us know that the message spreading on social media (basically Facebook), that there will be twice daily routine loadshedding from next week, isn’t true: 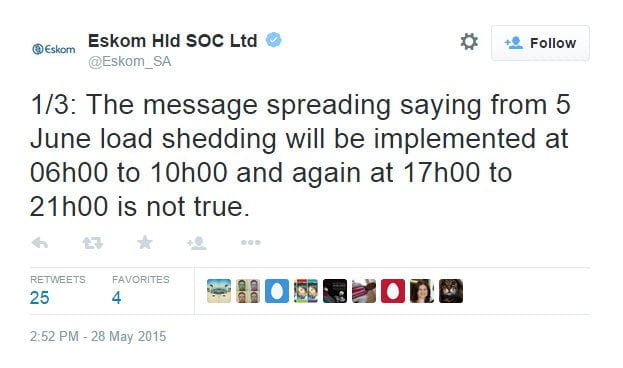 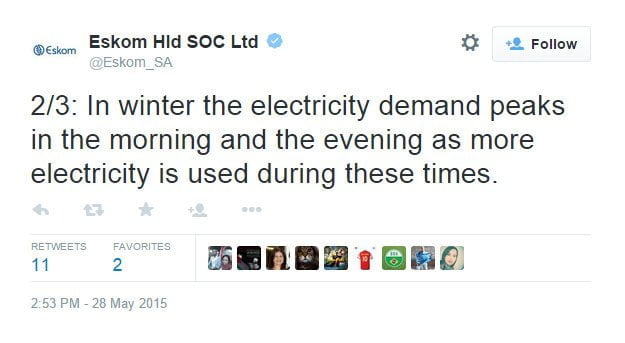 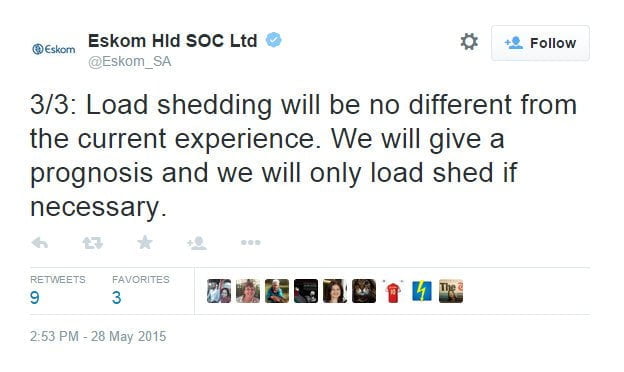 Several  individuals replied to these tweets with swearing and insults, the combination of which cut the nation’s power usage by 10% and assisted hugely with hastening the completion of the Medupi Power Station, thus negating the need for any loadshedding whatsoever.

Jokes. It didn’t really. Angrily typing some crap on your keyboard and sending it to a public relations lady sitting at a keyboard somewhere else doesn’t actually save electricity or speed up infrastructure provision.

But do keep trying, won’t you? It’s such fun to watch.