I’ve been playing some catch up with editing photos. Not that they weren’t edited previously, but it’s always, always worth revisiting them with fresh eyes. I made so many changes to images that I already thought were just right. You can get so involved in fixing bits of the image that you lose (no pun intended here) the bigger picture. I found and corrected several examples of this.

One particular favourite image from the set was this one: 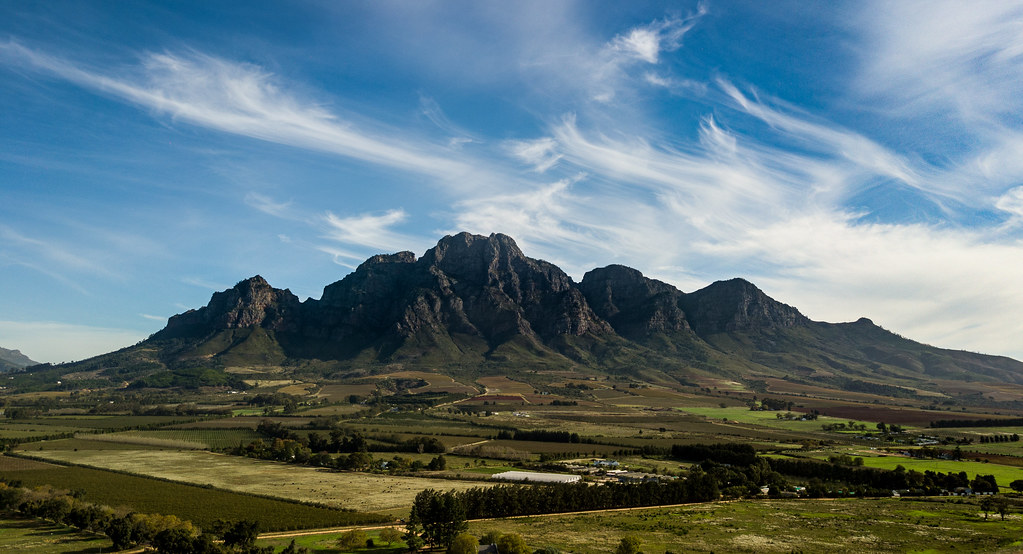 Five bracketed shots merged in Lightroom to ensure some semblance of decent exposure throughout. Bigger on black here. Picturesque.

There are at least one or two others which I really like from my recent expeditions, but they are part of a project I’m doing, and I’m not sure that it would be right to share them on here just yet (or maybe, in fact, ever).

The one above doesn’t have any such restrictions, as far as I’m concerned. Those mountains are fair game to anyone with a camera (or, in this case, a drone) and it’s really not my fault if they choose to be so very striking when I’m trying to take specific photos of specific stuff.

I mean, honestly, who could resist?

I ate some lovely meat on our weekend in Franschhoek. But then, under my windscreen wiper when I got back to the car, which had been parked on a backstreet (it was Van Wijk Straat for the purists out there) yesterday:

I left it big for the impact. It is quite impactful, isn’t it?
But yes, I see what they did there… And it’s pretty eye-catching. So… what and why?
I turned over, and found out… 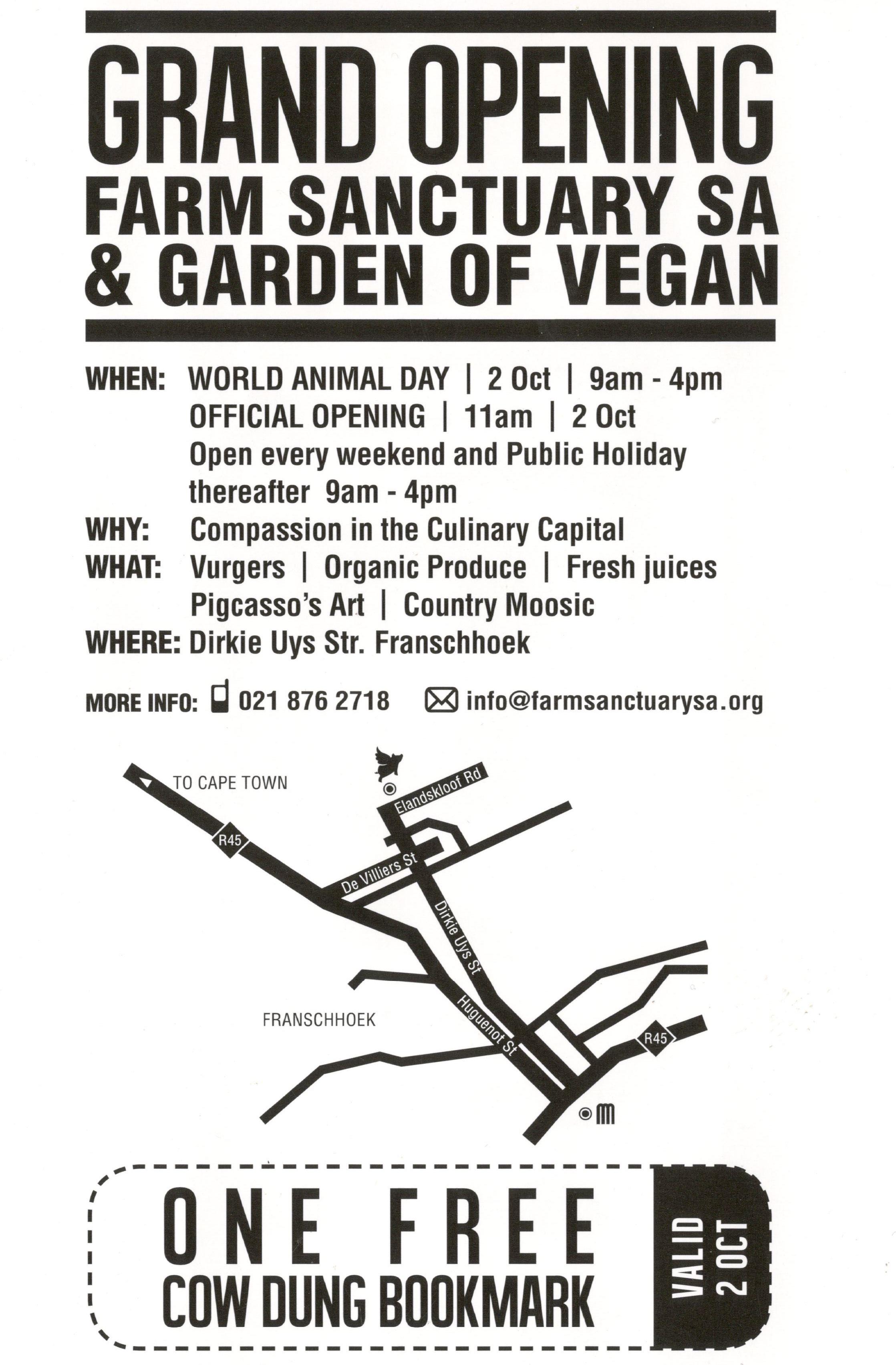 I think they may have slightly missed their intended market with this effort.
And “The Garden of Vegan”? “Country Moosic”? “Pigcasso’s Art”?

Each to their own, of course, but this really isn’t even close to my own. And… and… a free… cow dung… bookmark? That’s what I will be given if I turn up to this event? That’s what you will reward me with for supporting your cause and spending my valuable time at your grand opening?

Do you actually want people to come along or not?

Those of you following me on Instagram will know that the amazing Mrs 6000 whisked us off to Franschhoek for the weekend.

Those of you who know what a weekend in Franschhoek entails (wine, food, views, more wine, more food, more views) will understand why I’ll only get round to sharing some thoughts and photos “soon”.

Another fake letter is doing the rounds in South Africa. This one is allegedly by Richard Branson (except it’s not) and it differs from the Trevor Mallach letter in that it appears that it was written as satire here, rather than just being attributed to an (apparently random) individual in a position of responsibility.

What is interesting is the way that the anti-EFF brigade have leapt upon this letter in much the same way as the anti-Zuma brigade leapt upon that Trevor Mallach letter. And once again, it doesn’t seem to matter to them that it’s not real – see this response on Facebook from the hysterically-named “Save The White People Of South Africa – STOP The Killing!” page (and then thoroughly wash your browser): 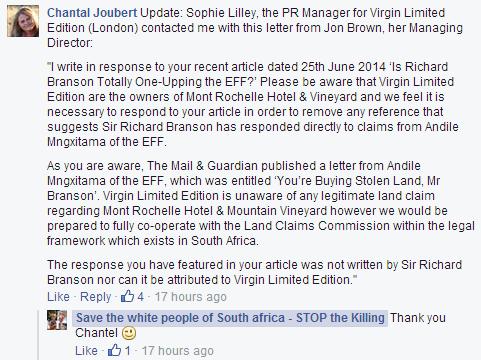 Yes, that’s “Thank you Chantel <smiley face>”, not “Oh no. We’ve used a misattributed letter. Richard Branson didn’t write this at all and we’ll fully acknowedge that we made a mistake and take it down immediately.”

Of course, that means that those arguing against the EFF’s policies in the future can triumphantly cite Richard as one of their team. Even though he had nothing to do with this “open letter”.

And there’s more of the same thing here:

…even if it’s a hoax, it’s absolutely hilarious and clever.

But I’m not sure that that partial disclaimer makes it OK to continue to portray the letter as Branson’s work, just because you can’t find the original source. 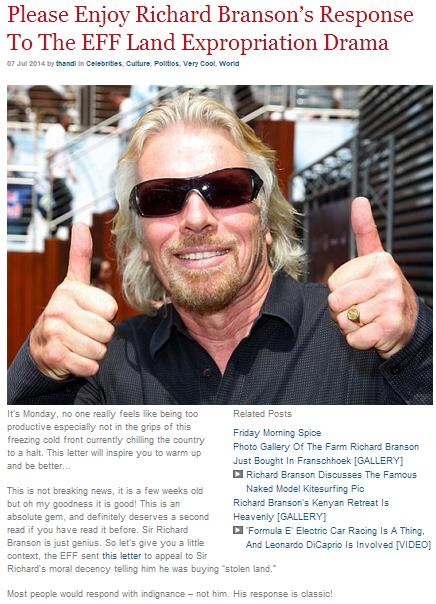 In which “thandi” says:

This is not breaking news, it is a few weeks old but oh my goodness it is good! This is an absolute gem, and definitely deserves a second read if you have read it before. Sir Richard Branson is just genius…Most people would respond with indignance – not him. His response is classic!

Ten out of ten on the hyperbole there. I almost wanted to read the whole thing again.

We return to the words of Thabo Mbeki:

It seems to me that the unacceptable practice of propagation of deliberate falsehoods to attain various objectives is becoming entrenched in our country.

Firstly, use your brain. What is the likelihood of Richard Branson actually having written this? Really?
That’s right, it’s pretty much nil. There should be alarm bells all over the place.

Next up, do your research. It’s really not rocket science. I used “Google” to find the original of this letter. 2oceansvibe relied on an unreferenced piece from micampusmag.co.za. The hysterical Afrikaners on Facebook apparently didn’t even bother give us a source for theirs.

And again. Stop attributing these words to someone just because of their name or position and the way that it fits your agenda. This letter isn’t being shared because of its content, but rather because of who “wrote” it; the convenient notion that someone big and powerful is kicking back at the renegade upstarts of the EFF.

Don’t get me wrong. I know that this won’t change a think. I know that 99% of the general land-owning population will continue accept that Richard Branson is their saviour who will fight the EFF until he has to sell his hotel, but if I can just reach that 1%, then my work here is done.

DISCLAIMER: This is a comment on the veracity of the letter in question and the intelligence and diligence of those sharing it, not a comment on the policies of the EFF or anything to do with a posh hotel in Franschhoek.

We did the touristy thing today and headed out to Simondium, on the outskirts of Franschhoek.

A quick stop at Dalewood Fromagerie for some of their award winning Huguenot cheese was followed by a visit to Solms Delta,where we were helped out by the chatty and informative Leon.

Then on via Vrede en Lust – lovely architecture, disappointing wines – for lunch in The Glasshouse at Babylonstoren. Because when it’s 43C in the shade, a long walk through some kitchen gardens is exactly what you need. Lunch was exactly what I needed though and it was really good.
And then home on the chaotic N1 and straight into the pool and a cold beer.

My camera is on enforced leave at the moment getting repaired, so I’m relying on my phone to record the holiday. It’s ok, but it’s not as good as my camera. That said, my camera isn’t great at making phone calls, so I guess all’s fair etc etc.