It’s about this time of year that I make my regular annual plea to help out people stuck out in the cold in our area. A couple of cold fronts have brought some very heavy rain and some alarmingly chilly temperatures to the Cape and this sort of weather obviously really exacerbates the difficulties for the homeless people in the city.

Last night, I was in my car, battling my way through floods, gales and torrential rain when I heard that my football match had been called off. I returned home (direct access from garage to house), got changed into some cosy warm clothes, lit the fire and got myself a coffee.

The Haven is a group of shelters which can help or local homeless people with – at the very least – a bed for the night. And they have very strict and well-enforced zero tolerance policy on drugs, alcohol, weapons etc.

If you can donate just R12 (that’s 64 pence or 82 US cents), then you can provide a bed for one person for one night.

And it’s really easy to do. Snapscan here, for you locals: 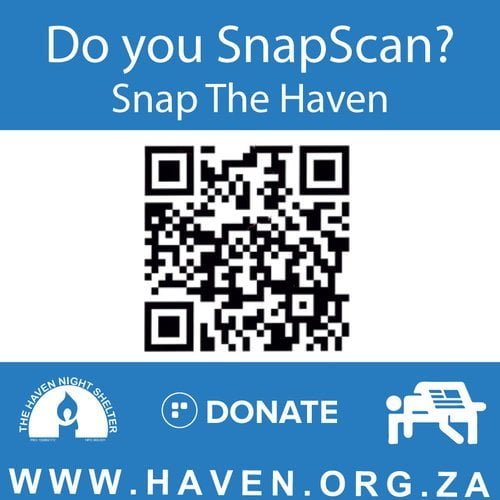 Or via this page if you don’t have Snapscan or if you’re overseas.

I’ll be making a donation and I’ll also be encouraging my kids to use their charity pocket money to help The Haven out this month too. Why don’t you make a difference as well. 12 bucks. De nada.

Incoming from Melinda, one half of the charity duo that is the Running Doulas.
It’s a brief account of their weekend away in Knysna and their experience of the dreaded Knysna Half:

The Running Doulas got off to a somewhat unfortunate start. Unhelpfully, disaster struck the day before the race, when I woke up with the beginnings of a cold. This led to a stressful day of indecisiveness before eventually agreeing to leave the decision to a doctor in Plett. After initially suggesting I decide based on how I felt on race day (which I naturally interpreted as ‘full steam ahead’), the GP called back having consulted another physician, and told me unequivocally not to run. Nothing like being banned from doing something to bring out the pig-headed in me! Decision made.

Race day arrived in a cold, dark and early fashion. An hour-long wait for taxis was followed by a hair-raising taxi journey up to a freezing cold, mid-forest start. We barely noticed. Wrapped in bin bags and Jet blankets, we joined the thousands of nervous runners lined up and waiting. A delayed kick off does nothing for the already frayed nerves, but happily four months of training and plenty of terrified projecting all evaporated as the Running Doulas headed off into the forest for our first ever half marathon.

The first 3kms of the race were mostly uphill. The next ‘undulating’ section could better be described as, um, uphill. The views were spectacular which almost made up for the pain. Almost. And just when the relentless uphill came to an end, the route led to the longest steepest downhill I’ve ever had the misfortune of encountering. Many runners walked it. Others ran it backwards or sideways in the interest of using different muscles. All of us cursed it. And then possibly the cruelest part of the race – on finally reaching the last flat 6km section, the route passed under a bridge before leading us to stairs. Stairs! I’d just run 15km. I very nearly sat down and sobbed.

Kim and I both struggled through the last few kilometres on exhausted legs to cross the finish line in under 3 hours. So enormous was our delight that you’d be forgiven for thinking we’d finished in the medals. There were hugs, cheers and probably unsurprisingly, tears.

Without a doubt, it was the support that carried us through the hardest parts of a tough course. Donations are still coming in but it looks like we’ll raise at least R27000, nearly double of original target. To all who supported either by donating or spreading the word – thank you from the bottom of our hearts. You’ve genuinely made a difference.

Great stuff!
My favourite bit was when they put stairs in the route after 15km. That’s like someone throwing broken glass into the long jump pit from the 8m mark onwards. “Congratulations on your fantastic achievement in getting this far. Now, in recognition of your efforts, we’re going to scar you. Permanently.” (a bit like this)

But I think that the real takeaway message from this is that fat figure in the last paragraph: R27,000. I’ve been doing some rudimentary calculations and I reckon that equates to 180 MatPacks. And that’s going to make a huge difference to 180 new mothers and their children. We’ll try and get another follow-up later this year to see how that money has been spent.

P.S. It’s never too late to donate™ – here are the banking details you require!

Hello readers.
Here’s something you can help with: the Running Doulas.

It sounds like some sort of comedy act (and in fact it may well turn out to be rather amusing to watch) but actually it’s two ladies doing something for a very good cause.

Firstly, you may not be conversant with the word “Doula”. Wikipedia can help here:

Doula is a word that has most closely become associated with a woman or man who provides non-medical support to other women and their families during labour and childbirth, and also the postpartum period.

In countries like South Africa, where the public health system is at best pretty awful, doulas are invaluable aides in the maternity wards. If you or someone you know has had a baby in a first world healthcare system or in the private healthcare system in SA you might want to compare your experience with this typical scenario:

The majority of  mothers are young, unmarried, have had no antenatal education and are desperately poor. They return home after a traumatic and lonely birth experience, on public transport, within about 6 hours of giving birth. All too often, they return within a year to give birth to another child.

It’s no exaggeration. Spend any time on Portswood Road near the Somerset Hospital and you will see many young women waiting for a minibus taxi, looking tired and scared, awkwardly clutching a bundle of blanket. It’s a heartbreaking sight.
And much as you might like to, obviously you can’t help every single one of these mothers. But what you can do is make a difference to some of them, via these Running Doulas I was telling you about.

Doula Kim and Trainee Doula Melinda are running the Knysna half-marathon this weekend to raise funds for Maternity Packs, each one of which:

…goes a long way towards changing the birth experience of the young mother who is touched by the gesture and better prepared for her first few weeks of motherhood.

Aside from the important reasons that they are doing it, it should be noted that the Knysna half-marathon (or the “Knysna Half” as it’s known to those of use who are in the know about writing about other people running long distances) is no ordinary run. It’s widely regarded as one of the most difficult and dangerous races on the local running calendar.
This is primarily because of the knee-sapping, cartilage-busting, mainly downhill route and the wild animals which still roam the ancient forests of that area; we’re talking elephants, zebras, wildebeest, griffins, dragons and unicorns.
Well, we’re talking elephants, anyway.

But I digress. Often.
You can help Melinda and Kim by supporting their run and donating to their important and worthy cause via this bank account :

If you want to get in touch with Melinda about the run or with any other doula-related query, you can email her here or via twitter here.
And to show our support for the cause, 6000.co.za is putting our money where our mouth is and donating 2 packs.

As you may know, I work at Ogilvy and over the past 6 months have been trying to get this amazing project approved and moving and finally its happening and I need your help. When we moved into Woodstock a few years ago we wanted to help uplift the area and therefore adopted Percy Bartley House as our un-official charity. PBH is an NGO operating out of an old home in the area which looks after troubled teen boys – those involved in petty crime or living on the streets – and aims to not only provide a home for the boys but to give them a second chance; whether that’s enrolling them in school or skills training, or teaching them life skills.

PBH is run-down and has lost its sense of life and colour. We’ve therefore collaborated with Write-on-Africa – a not for profit initiative also based in Woodstock, that mobilizes creativity in Africa for inspiration, social change and urban rejuvenation. We’re giving the home a new coat of paint, we’re planting a sustainable garden and we’re providing them with donations of linen, towels and furniture from our clients. However, most importantly, we’ve brought on a crew of well-known graffiti artists and illustrators (Faith47, black koki, mac1) to breathe new life into the home, making it a work of art which inspires the youth, while also getting them involved in the process and teaching them responsibility.

This after I saw this video yesterday featuring some of the kids they are helping and Farlane Nsinale – the Director and “Mom” of the house. It’s a great advert for the work they are doing there and the opportunities PBH is providing street kids who would otherwise be in a lot of trouble. It’s also evident that, like Farlane, Amy is extremely passionate about making a difference and it’s for these reasons that I am more than happy to help her – and them – out.
Back to Amy’s email:

I have initiated a fundraiser – selling tickets to a movie – Long Street – set in Cape Town, directed by well-known SA director, Revel Fox and starring his daughter – Sannie Fox – you may know her as lead singer from Machineri. I booked out a cinema at the Labia on Orange for opening night on Thurs Sept 23rd at 20h00 – 20h30.
See the facebook event link here.
Anyone who wants tickets (R50 each) just needs to email me here – I have 60 tickets left to sell.

That would be your safest option, but if you’re feeling lucky, we have 2 pairs of tickets for the opening night of Long Street to give away. To stand a chance of winning a pair of tickets, firstly make sure you are able to make it along (i.e. you will be in Cape Town and not doing anything else that evening) and then simply tweet this: “#PercyBartleyHouse http://u3.co.za/id”.

The winners will be drawn at random from entries at 21:00 on Monday evening, giving you enough time to plan your week accordingly. Judges decision is final etc etc.

I’m not expecting this to be quite as big as the #AfrihostRelaunch thing.
But I think that’s for the best, don’t you?

And well done to Amy and all those involved in making a difference at PBH.