The good news is that we survived yesterday. And in actual fact, the whole thing was a huge success. A hot, sweaty, dusty success, but a success nevertheless.

The slightly worse news is that today is very nearly almost as warm. For the most part, I’ve been hiding inside next to a panting beagle, but parental duties called and thus I find myself writing this from a local trampoline warehouse. This is essentially just a big metal box in the sun, full of people physically exerting themselves, and their air-con maintenance leaves a lot to be desired.

That comparison having been made, it should be noted that my favourite thing to do when I get out of a sauna is have a massive bottle of Milk Stout.

And I see no reason to change things just because there’s not a copious amount of pine or a guy called Lars involved here.

Because of one thing or another (but mainly one thing), I haven’t had an alcoholic drink since February 14th.

I’m not in desperate need of the alcohol, but I have missed the taste of Castle Milk Stout.

This first one is going down like a homesick mole.

However have I managed without you? 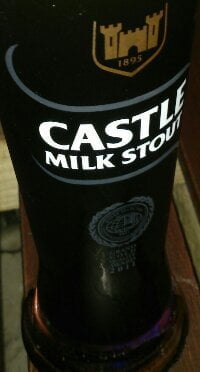 And a quiz with the Tall Accountant (he says “Hi Mom!”) and the Drilling Accountant.

LOL. See what I did there?

No, of course not, not yet anyway.

The widely-used insect repellent Deet appears to be losing its effectiveness against mosquitoes, scientists say.

Researchers from the London School of Hygiene and Tropical Medicine say mosquitoes are first deterred by the substance, but then later ignore it.

This explains a lot. Despite my best efforts, I am still regularly attacked in my bedroom late at night (please note that no links to current bail hearings are implied here). And while I’ve tried many different repellents, I’ve never been able to get hold of any N,N-diethyl-meta-toluamide. Just as well, it turns out, since, like antibiotics,  it doesn’t work anymore.

But how did it even work in the first place?

For many years, it was not clear exactly how the chemical worked, but recent research suggests that insects simply do not like the smell.

So whoever came up with Deet obviously never had to change a nappy then. Because you have to become resistant and immune to that nasty smell as well. You can overcome it. As can mosquitoes with Deet, it seems.

So we need something else. Some way of “Deet”erring these vicious bloodsuckers. And there’s definitely money to be made here.

I’m still working on my Castle Milk Stout ingestion method. As yet, there appears to be no discernible effect on the insects, but the research has been fun and probably deserves a whole lot more investigation.

My doctor has told me that the best diet to repair my damaged ankle is to consume Lindt dark chocolate and wash it down with Castle Milk Stout.

Actually, he might not have said that at all, but I’m almost certain he didn’t say that I couldn’t try that combination.
I’m not really into alternative medicine, but I might give this a shot.

I’ll let you know if it works.