Let’s be honest about this: mine is nowhere as big as some people’s. And I doubt that it will ever get that big.

But size isn’t important – it’s how you use it that matters, right?

Anyway, that’s why I popped my small one out earlier in the back garden and pointed it skyward. Right at this little fellow. 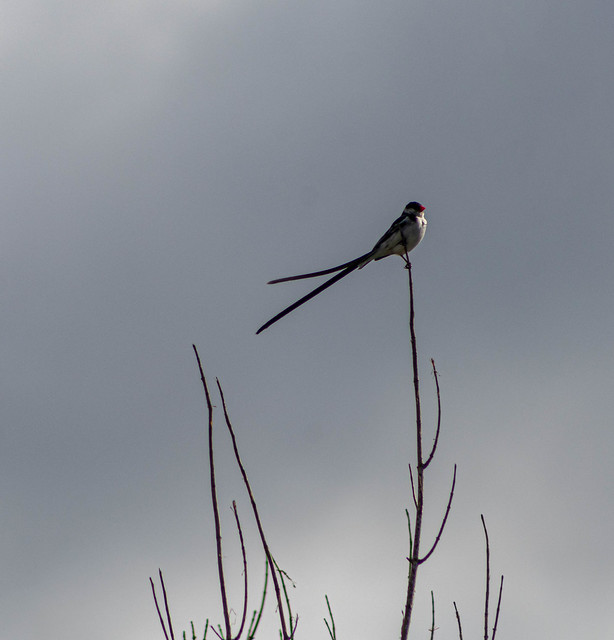 Here’s a bigger version. And here’s a different angle.

He’s backwards and forwards across the neighbourhood hoping for a bit of nookie from first light through to sunset, and he’s a chatty little bastard as well. I’m not sure if his efforts have yielded any success yet, but if they have, then it’s very clear that he would like some more success please, Ma’am.

He’s even more spectacular in flight with a stiff… breeze blowing, but that wasn’t happening today. If I do spot him in those conditions, I’ll whip my small one out again and give it my best effort.

We got a new sunbird feeder at the market on the weekend.
I had previously made my own sunbird feeder, and it worked well, but this one is more aesthetically pleasing and if you’re going to hang it where you can see it (which obviously  we are), well…

I’m sure that there will be plenty of photo opportunities, but we did a quick test shoot in the unappealing light this afternoon. 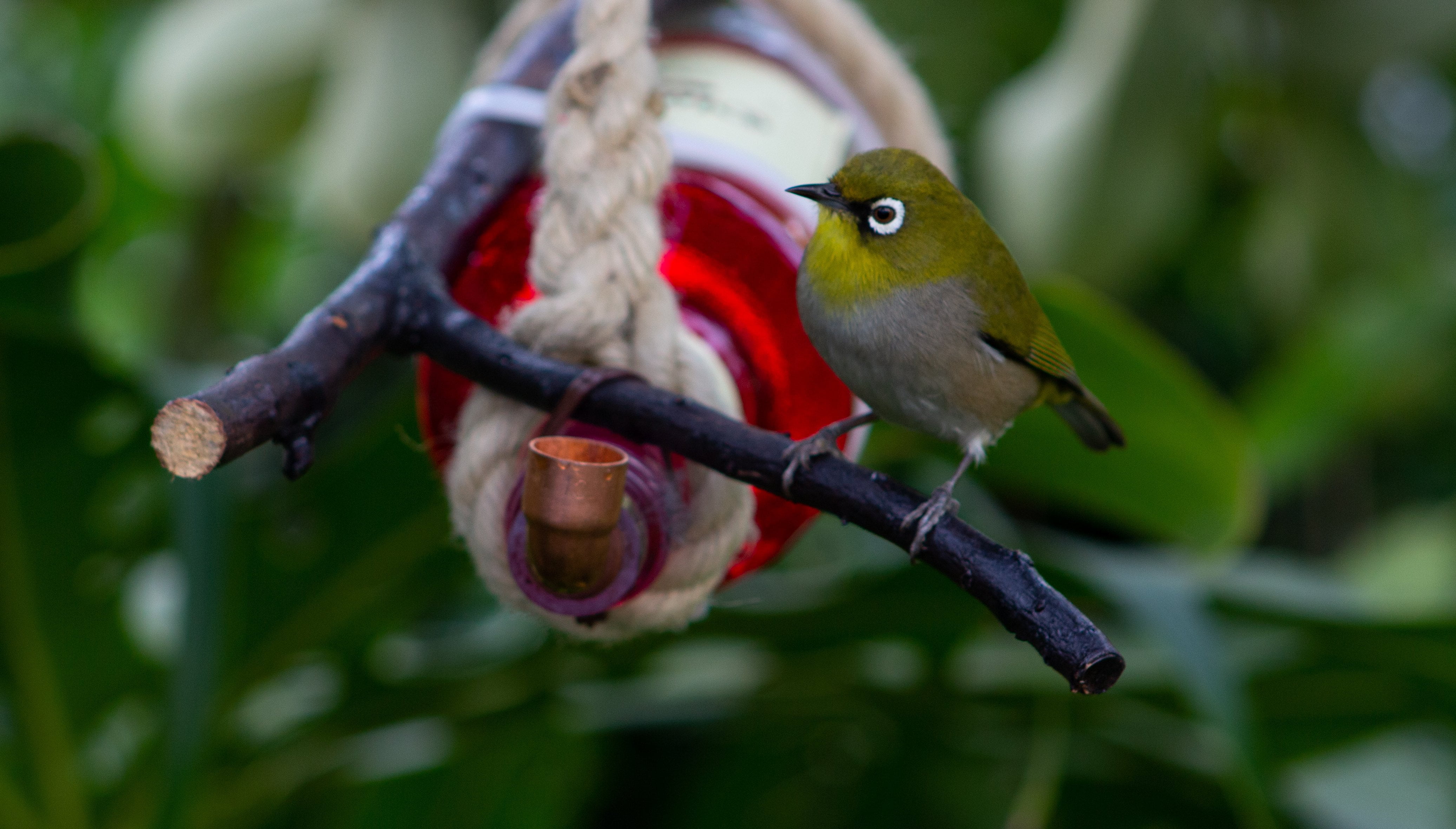 Yeah, that’s no sunbird. The local Cape White-Eyes have taken to it with great enthusiasm.
There have been a couple of sunbirds around as well though (and an opportunistic red-wing starling), but when the light is better I’ll do a proper set-up and hopefully get some better shots (maybe even to rival my daughter’s efforts from last week).

Watch this (that?) space!

One camera, one tripod, one bird table. And a remotely controlled shutter. 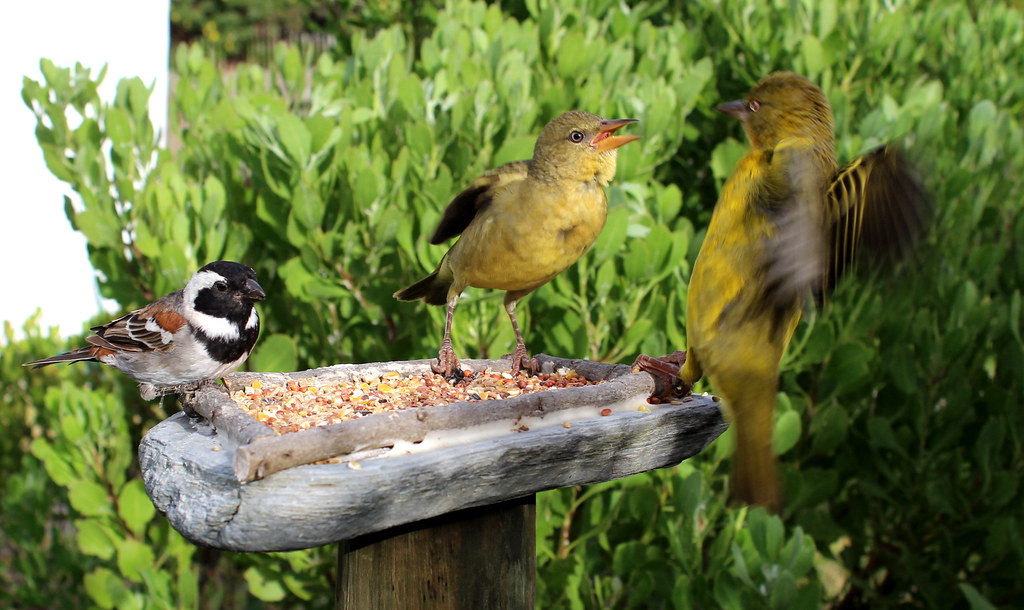 Here’s Mrs Cape Weaver laying into her husband, givin’ ‘im what for innit, after he came back late again from the ‘Bird in the Bush’ pub down the road.

It’s not good enuff, Barry! You’re neva ‘ome! Messin’ abart wiv all those chicks darn the pub! Some of them are ‘ardly out of the egg! Wot abart your family, Barry? Wot abart our  avian offspring? And where on erf did I get this terrible cockney accent from when I’m a weaver bird from Sarf Africa?

Note the world-weary expression of the male Cape Sparrow on the left. He’s seen it all before from his missus. But that was back in the bad old days when he too had an alcohol addiction problem. Thanks to an online (the line in question being the telephone wire to the house next door) support group, he’s been clean for over a year now, follows a healthy, seed-based diet (plenty of omega-3’s, proteins, fibre) and only drinks water. Sadly, it was all too late for his marriage, and Mrs Cape Sparrow moved in with a Speckled Mousebird [I have no idea how this would actually work] despite his (now fulfilled) promises to change.

Such is (bird) life in the Limestone Fynbos of Cape Agulhas.
Like a giant bush-based soap opera.

This week, I have been mainly plagued by birds.
And not in a good way.

On Wednesday, I spotted a pigeon sitting on the one of the roofbars of my car, repeatedly defaecating onto the roof. I tried to shoo it away. I tried clapping. It was unimpressed. And so, I approached it and, almost in slow motion, took a swipe at it.
Hand connected with bird, hard.
Bird crashed off the roof and onto the car park floor, hard.
Unfortunately for me, my shooing and clapping had attracted the attention of the ladies in the office next door. All that they saw was me klapping an innocent pigeon.
Given the lack of context, they were rightfully horrified. But at least the pigeon didn’t come back.

And then, on Thursday morning, still half asleep, I opened the curtains at home to find another pigeon on the patio. It stared at me – its eyes burning through to my very soul – as if it knew all about the klapping incident the previous day. This time, I shooed and I clapped, but at least when it didn’t leave, I refrained from attempting to strike the thing (even though there was no-one there to witness it this time).
This pigeon had leg rings on and with a bit of help from google, I managed to contact the local pigeon racing union and they came round to collect it. Turns out that it had been in a race from Springbok in the Northern Cape, back to Cape Town (but not to my back garden). I guess it got lost and lost the race.
The winner got R100,000. Once again, I realised that I am in the wrong career.

Yesterday, on the drive down to Agulhas, I killed two birds (1x Cape sparrow, 1x Cape weaver) by smashing 1300kg of car into their puny little bodies at 120kph. I’d rather have avoided them, but I couldn’t.

Again, as with the pigeon encounters, this is an unusual occurrence. I was once in a taxi that killed a magpie between the airport and Castletown in the Isle of Man in 2002, but that’s it.
Birds and I are not mixing well this week.

Why am I telling you this? Because I’m planning to braai a chicken this evening and I’m now convinced that it’s going to kill me. So, thanks for reading all these years. It’s been fun, but I’m guessing that this is the last you’ll be hearing from me.
And stop that cheering at the back. Now.