First run in a couple of weeks this morning. Not all of me wanted to help out. My legs and my lungs (two parts which I have always felt are fairly integral to successful running) were particularly uncooperative and I am already pretty sure that the former are planning an agonising protest for tomorrow morning. But you don’t get anywhere without putting in a bit of effort and while today’s 6km might have taken rather longer than perhaps it should, it did still get done.

All of which brings me neatly to last night. Football last night did not get done. One minute it was on, the next, there was a downpour and the courts were underwater and the game was called off. I took the kids to the trampoline park instead and we counted all the holes in the roof as I preemptively planned our evacuation route.

But there was a lot of rain. The last 24 hours gave us 70mm at Kirstenbosch and an absolutely incredible 186.9mm at Dwarsberg – slap bang in the middle of our dam catchment areas. Kapow. 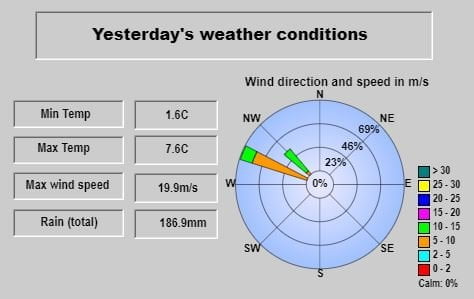 Those of you who have followed this blog over the last few years will recognise what really huge news this is.

But it seems that we don’t always realise just how lucky we are. The complaints about the winter weather in Cape Town seem to have been more vocal and numerous than usual [anecdotal observation]. But this weather is just the Old Normal. We haven’t had a proper Cape Winter for a few years now, which almost cost us our city. But it also retrained our memories into thinking that what happened last night and over the last few weeks is unusual or abnormal. It’s not. That is exactly how winters used to be prior to 2016. Grey, cold, windy, wet. Who could forget the warnings we used to be given?

The severe cold, wet and windy conditions expected to spread eastwards across the Western and Northern Cape provinces this weekend could be fatal for livestock and dangerous for humans, the Cape Town Weather Office warned yesterday.
Forecaster Carlton Fillis said rainfall of up to 50mm, combined with gale-force winds and temperatures of below 15C, was especially dangerous for livestock such as goats. People should also be careful.