Some of the adjectives used to describe Donald Trump in the lead up (and now aftermath) of the US Election have been… “choice”, shall we say?

But what if there was a hidden side to President Elect Trump?
What if his seemingly angry, outward persona is merely as a result of deep, lasting trauma?

I’m certainly not saying that the manifestation of that persona is excusable, merely that it might be more understandable if we could pin it on some difficult experience he had suffered.

I’m talking about this photo, obviously. 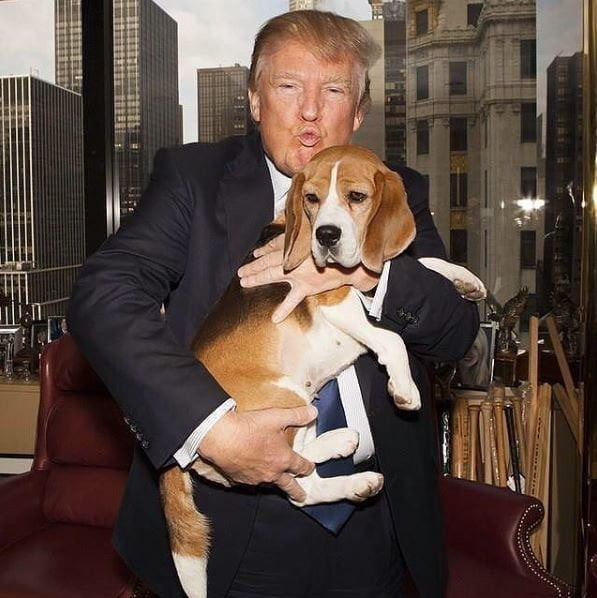 This is the side of Donald Trump that no-one has ever seen. This is the moment that has scarred him for life. See how he tries to pose for the cameras, tries to appear cool, attempting to grasp a probably-wriggling beagle.
See how it refuses to look anything but profoundly disappointed.
See how it has (almost certainly) chewed something important of his.

This isn’t behaviour specific to its proximity to Donald Trump.
We’ve all been there.

And these things can affect a man. I don’t profess to wanting to build a big wall or have individuals of a certain religion removed from my presence. And I’m certainly not defending those views. Not at all.

I’m merely suggesting that being near a beagle can change a person.
And not in a good way.

Those commentators concerned over Trump’s new democratically-given access to the “Big Red Button” controlling America’s significant nuclear arsenal (and the implications thereof) would do well to glance to the bottom right of the image above and the wide selection of baseball bats. None of which he has used on the beagle. This sort of evidence of extreme restraint will obviously come as some comfort to you hysterical individuals.

Like it or not (and I suspect I could likely gauge the majority public response from my readers) Donald Trump is the new POTUS.

But don’t ever be fooled: the beagles are still in charge.