[accent=”Yorkshire”] When I were a lad [/accent], I always used to scoff at the kids that turned up to school claiming that their dog had eaten their homework. Not only was it the most obvious cliché, but it was also wholly unbelievable. Dogs don’t eat homework. Dogs eat dog food, human food, bones and – sometimes – socks. Sheets of A4 covered in conjugated French verbs don’t make the grade. Literally.

I never had a dog, so I was never able to use this excuse. That said, I’m pretty sure many of the kids who used it never had dogs either.

Fast forward a few years into what should be adulthood, and people are still using the DAMH excuse. But now it’s been suitably upgraded.

That’s a lot of moola to have misplaced, and clearly too much for your average beagle to have devoured, sir.

But no, this was no canine-related disaster. . No, there’s an equally implausible excuse for not having the money to hand right now, officer:

It was a mystery to me too. I have been saving the money in the bank, but I found it difficult to account for it. So I started saving it in a vault in the office. But each time I open the vault, I will find nothing. I became worried and surprised how the millions of Naira could be disappearing from the vault. I began to interrogate everybody in the house and office, and no one could agree on what might have happened to the money. I continued to press until my housemaid confessed. She said that the money disappeared “spiritually”. She said that a “mysterious snake” sneaked into the house and swallowed the money in the vault.

But then, if there was any animal which could have sneaked into the vault and eaten all that cash, it would most likely be a snake. Larger animals would have struggled to get through the keyhole and smaller animals wouldn’t have been able to swallow the money. But snakes are brilliant at getting into small spots and equally good at eating things which initially seem too big to go down the hatch. 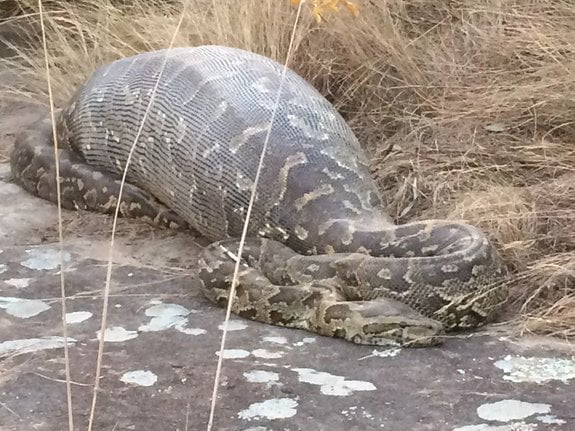 The best of both Naira-pinching worlds then. Hmm.

And to be fair, just this morning when I was searching for my car keys and (while looking suspiciously at the beagle), asking if anyone had seen them, my daughter told me that she had seen a mysterious spiritual snake slithering off with them yesterday evening.

Of course, this turned out to be complete nonsense: they were behind the fruit bowl. But the fact remains that they could have been taken by a mysterious spiritual snake. It’s just that this time, they weren’t.

Now that we actually have a dog, I see the world through entirely new (often rolled) eyes, and consequently I believe that anything is possible. Thus, I’m (belatedly) coming around to the idea that actually the dogs could have eaten all that homework.

And if I’m going to make that concession, then it seems only reasonable to admit that Joan and her housekeeper’s mysterious spiritual snake story might also be true.

I’m planning to write a letter to the Nigerian authorities demanding Joan’s immediate release, while also advising the local police to step up their mysterious spiritual snake patrols before any more cash or bunches of car keys go astray.

Prevention is better than cure.