The world has ended.

Or so it would seem if you were to tune into Cape Talk today. Whities from all races – anxious not to miss the ‘soccer’ bandwagon – have tuned into the Confederations Cup and are upset by several issues:

1. The rules of the game,
2. The way the black people in the crowd booed the white bloke playing for SA and
3. The noise of the trumpets – called ‘vuvuzelas’.

Of course the ball is round, not like a proper ball, which is oval. And the goal posts stop at the crossbar instead of making a giant H shape. Weird. And the players don’t use their hands. And they’re allowed to pass forward. Weirder.

The white bloke playing for SA is Matthew Booth. ‘BOOOOOOOTH!’ shout his adoring fans when he has the ball, prompting desperately misconstrued allegations of racism from the uneducated paler quarter of Cape Town.

Finally, the vuvuzela issue. ‘We don’t do that at rugby, so it can’t be right!’
Oh please.
The vuvuzela is to SA football what the braai is to the Afrikaner. And you are ruining your desperate attempts to be trendy by watching football by trying to change it. Ain’t happening. The vuvuzela will be the trademark of the 2010 World Cup.

Here’s a newsflash! Just because you weren’t watching doesn’t mean that football didn’t exist. In fact, it was getting along quite happily before you turned up and started moaning.

Want to stop the irritating noise that’s spoiling it for everybody? THEN STOP WHINING! Were you up before sunrise?
It was magic on the way out to Stellenbosch this morning. Photos are on Flickr.

Mainly for my foreign visitors and those dwindling numbers of locals who persist in suggesting that South Africa won’t be able to host the 2010 FIFA World Cup because of… “stuff”; an excellent set of photos from Rob Gilmour taken from a helicopter* over the Green Point Stadium. 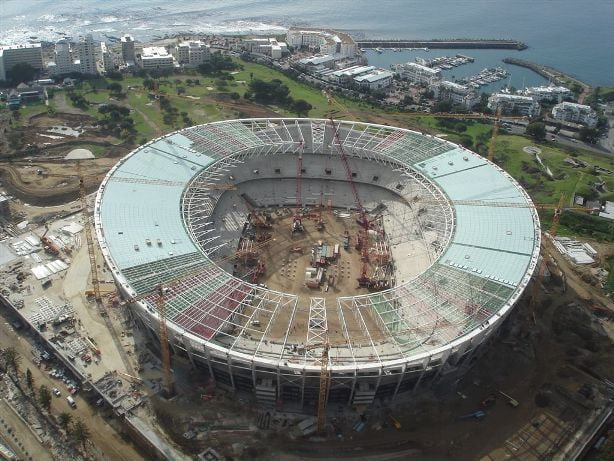 Exactly 365 days from now, I will be in there with 69,069 others, watching the all-important A3 v A4 clash. A win in this first game is vital, given that A1 and A2 have already played in Jo’burg a little earlier and there was a result of some description. It’s 9:22pm CAT, just into half time after an action-packed first half and I will currently be queuing for an overpriced boerie roll and some pissy american beer.

* either that or he’s really tall…

Oh dear. Eric Janssen’s Southern View Rugby Blog at The Telegraph has really set the cat amongst the pigeons by “mocking an entire nation because of attendances at rugby”. But I actually found it pretty funny, if a little contrived at times.

Look back to the 2005 tour to New Zealand … grown men were crying in the pub because they did not have tickets to see one game – any game, not even a Test – featuring the men in red.
I’m told South Africans are blaming high ticket prices for the low attendances, but get over it. There are many ways to save a few rands to buy a ticket … don’t throw a whole damn kudu on your bbq next time; drink fewer disgusting brandy and cokes; give the escort agency a miss next week; save legal costs by not shooting someone soon.
Tickets were far from cheap in 2005, but that did not stop people – real rugby fans – from filling the stadiums.

Firstly, he’s right on the attendances. They have been shockingly poor. Embarrassingly so. Either that or the SA rugby fans have been cunningly disguised as plastic seats. And this is weird, because generally, the fair-weather South African rugby fans turn up in big numbers for big rugby games. And surely the much-anticipated British and Irish Lions’ tour is about as big as it gets?
But then, as Janssen states:

…provincial sides stripped of all their current Springboks are making the warm-up games virtually meaningless. It’s a disgrace.

Janssen’s view on SA are stereotypical and exaggerated – attempting to elicit a response, which they have. And he knows which buttons to press because he lived here in SA for a good few years. But I can’t believe that the locals are so up in arms about the whole issue. Take a joke. Because it’s funny.
And if you want to be all serious, then if rugby and pride in your country are so very important to South Africans, why are so many of the stadiums empty on this tour?

There were far fewer complaints when he described the (Gauteng) Lions as “a pathetic bunch of Skoda-driving, sandal-wearing, tree-hugging, lentil-eating, polyester-wearing, greased-hair weasels” and “a feeble collection of player-wannabees” last week.

Mind you, I think he understated that a bit.

Yesterday, as a full moon rose over the Cape peninsular, about 120 people gathered at Kommetjie’s Long Beach to honour the whales who were shot there last weekend.
Oblivious to all of this, two whales basked off-shore within sight of the onlookers. Incense smoked and burning candles were arranged in the shape of a fish on the small promenade overlooking the beach,
Local sangoma and shamanic healer Devi Hill banged a Native American drum and chanted a bit as fellow spiritual healer Shelley Ruth Wyndham called on mankind to respect planet Earth.
“We humans are disrupting systems which have taken millions of years to develop,” she said.
She led the small crowd down to the sea where the whales were shot, and the chanting resumed. “We are one, we are one, we are one! Wake up! Wake up! Rise with the rising sun!”
Then night fell.

I can’t stand the shallowness of people who attend these kind of events. Hundreds of people are dying each week in SA of malnutrition, HIV, violent crime and other stuff that isn’t included in those three categories that I just mentioned and yet they organise a memorial serivce for some dead whales? Please.
Now I like whales as much as the next man (and I’m assuming he’s not Norwegian or Japanese), but holy crap, these people have got their priorities seriously screwed. And look at the idiots that are doing it. Why have the candles in the shape of a fish? Whales aren’t fish. They’re mammals. Genetically, whales have more in common with Oprah Winfrey than they do with fish, so why not have an outline of a popular American talk-show host on the Prom instead?

And why bang a Native American drum, Devi? What’s wrong with the good old African drum, happily banged for years and years here in Africa? Or were you just showing off amongst your hippie friends? I recognise that “Native American” is a bit of a trump card when it comes to all things spiritual, but rejecting your local heritage is unforgivable.
And Shelley Ruth Wyndham’s rantings are nothing short of idiotic, too. What “systems” (which have taken millions of years to develop) were at play when those stupid animals chose to crash into the beach at Kommetjie? Cos SatNav certainly wasn’t one of them.
And how exactly did we “disrupt” those “systems” by shooting the whales? What were they planning on doing if we’d left them there? Growing legs and sneaking off into Noordhoek to do the Pub Quiz at the Toad in the Village? Leaping up in the dead of night when no-one was looking and opening a successful five-star hotel and spa complex in Misty Cliffs? Or just lying there and suffering unbearable agony until they eventually died?
I know which one my money is on.

Seriously Shelley, stop moaning and get proactive. If humans really are doing so much damage to the planet, then why don’t you do Earth a favour and pop off to join the choir invisible? Every little helps. Can you imagine how much CO2 is chucked out by that incense and those aforementioned inappropriately-shaped candle designs? Or how many small wading birds were unable to get their supper because they were scared off by your fellow idiots’ daft chanting? Talk about disrupting nature.
We aren’t one, Shelley. You and I have as much in common as Jacob Zuma and ‘Dotty’, an eight-week-old Dalmatian puppy living in Walton-on-the-Naze in Essex; as chalk and cheese; as Castle and decent beer. So please don’t think that I am one with you or your foolish friends. Frankly, the thought repulses me.

I really hope that this is the last we hear of those sodding creatures. Yes, it was sad that they crashed into a beach and died. But the incessant whining, accusations and recriminations around the subject are – frankly – beginning to get right on my tits. And this stupid ceremony – as misguided as the whales were a week earlier – really tops it all off. What a waste of time, effort, money and human spirit.
What is this going to do? Is it going to stop whales beaching themselves here or anywhere else again? Is it going to stop them swimming straight back into shore once they are dragged back out to sea? Fools.
If you must do something with your Saturday evening, then make it worthwhile. Make it meaningful. Make it beneficial. Don’t make an arse of yourself by banging a trendy drum and singing on a beach. Because, believe me, crying over dead whales while ankle-deep in ice-cold sea water makes you look like complete idiots.

Note: A whole range of interesting swearwords (across three different languages) were removed from this post before publication, in case my Mum reads it.
This is in keeping with the 6000 miles… terms and conditions as described here.