The Enquirer-Bulletin has made a slight error and wants to set the record straight. 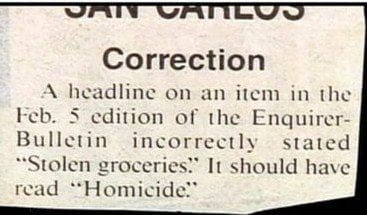 There. I hope that clears everything up now.

I am constantly poking Mrs 6000 in the direction of a big screen telly, but she remains disinterested. That’s because Mrs 6000 doesn’t actually watch a lot of television. She only watches on Friday evenings because there’s some god-awful American programme with a plethora of bimbos throwing themselves at a bloke from Watford.

But I digress. The reason that is what is watched in our household on Friday evenings because there is no footy on. Which brings me to the second reason that Mrs 6k is against the big screen telly idea – that I would end up watching more sport.
This is an utterly ridiculous suggestion. I couldn’t possibly watch more sport than I do now. Unless they start regularly screening football matches on Friday evenings, of course. But if the payoff for a smart new TV was a continuation of Friday nights being crap American telly, even when Brentford v Swansea is on 203, then that’s fine by me.

And then there’s the money. Red wine is an expensive business and when you’ve got to bring up two kids on top of that – well, you can see that there’s not going to be much to spare. And then you have to buy them food as well. And pay for electricity, which is going up again next week/month/year/all of the above. It never ends.
(Incidentally, a big screen telly is pretty power hungry, but I’d be willing to limit the amount of time it was on by switching it off on Friday evenings.)

Of course, there’s actually nothing wrong with the telly we have at the moment. It’s just not very big. And no matter what they say, size is important.

Which sounds fine in principle, but it would be a little hypocritical of me to do that, since the kids aren’t allowed close to the TV screen and are constantly being chastised for it, drawn in by the gravitational spell of CBeebies (and not just Sarah-Jane Honeywell, like their dad).

So that leaves only one option, then. Shrink the furniture.

Police in Ogden, Utah, were called to the hospital and arrested Manning on charges of forcible sexual assault.
When later asked about his actions he said he had no idea why he carried out the assault. Police confirmed that he missed the birth of his son.

To be honest, I think this could have happened to anyone. After all, every dad breaks the law on the day his son is born: it’s tradition.
Me? I did 150kph around Hospital Bend at 5 in the morning.
But probably only because there were no cute nurses to molest.

That’s a complete lie. It rained all day today and it also rained a bit yesterday, even though the sun was shining at the same time.
Apparently, in the UK this is known as a “sunshower”, although I’ve never heard that expression. Still, I only lived there for 30-odd years.
In Cape Town, where the weather is just plain weird, this sort of thing happens far more often. It happened yesterday and I photographised it. I have been told that the phenomenon is known as a “Monkey’s Wedding”. However, I have never dared use that phrase, just in case it was one of those Old Skool racist things that were “perfectly acceptable” to use “back in the day”, but that one – quite rightly – can’t say now.

However, having done a bit of research (ie.I googled it), I have discovered that the phrase comes, in fact, from the isiZulu umshado wezinkawu , meaning (perhaps unsurprisingly) “A wedding for monkeys”. There is no further explanation as to why this is the case. However, it would seem that I am safely able to use the phrase from now on without fear of prosecution.

There’s also an Afrikaans version, which Wikipedia tells me is jakkelstrou or “Jackal’s Wedding”.
This, it seems comes from the dainty little rhyming couplet:

Which actually makes perfect sense, because I did notice that there was a jackal in the back garden who seemed intent on marrying the wolf’s wife while the rain fell and the sun shone faintly. With hindsight, that probably would have made a more interesting photo than the one above.

I’ll try to remember that for next time it happens. Sorry.

OK, so I recognise that the moon doesn’t get “bombed” every day, but the hysteria and lack of understanding surrounding this experiment reminds me of the “we’re all going to die” attitude when they switched on the Large Hadron Collider last September.

Obviously, we’re all still here.
Which is not always good news, because then people can make comments like this:

Uh. Are these people st00pid? We kinda need the moon for tides and stuff.

Which then prompted this:

…the Russians are going to get cross – Obama wins the Nobel Peace Prize and now he’s bombing the moon and causing chaos!

Surely they can’t be 100% with their ‘predictions’ of where to bomb and EXACTLY what the impact might be? Maybe we’ll have floods for the next month.

The whole thread is hilarious, actually.

Oh, and they’re switching on the LHC again in November, so we only had a few weeks to live anyway.