If you look at the facts above, then Slide The City (STC) – while still sounding like a whole lot of fun – doesn’t seem to make a lot of sense, does it? And that’s why there are not one but two online petitions calling for it to be banned. I’m not helping you out by linking to them, but I will share the fact that one of them is called: Stop the City of Cape Town From Allowing Slide the City Events During a National Water Crisis. All the facts, all in one catchy title. Perfection.

We applaud the public’s rightful concern over the prospect of wasteful consumption of our most precious resource, but would like to assure them that the use of drinking water for this event was never contemplated.”

40 kilolitres isn’t actaully a lot of water, either. It’s about what one average household uses in a month. I’m not saying that we should waste 40 kilolitres just for the sake of it, but I can’t help but think that there might be better ways of saving water than going lumbering after a single event in Cape Town.
A single event which re-circulates its water so as not to waste any, and then gives it back at the end of the day:

In Cape Town, Johannesburg, Nelspruit, Knysna, Pretoria and Port Elizabeth, the water is put through the filtration system and then put into tankers and delivered to the municipality to be used where they need it most.

Could it… could it really be that someone hasn’t actually done any homework before launching an online petition?
Could it?

As someone wise commented earlier:

“#SlideTheCity must be a bad idea, because water” say the knee-jerk, bandwagon-jumping, fact-ignoring, petition-signing slacktivist brigade.

Still, online petitions can sometimes carry a disproportionate amount of weight, so maybe the City of Cape Town will take note. Once they’ve removed the large plank from their own eye, that is: 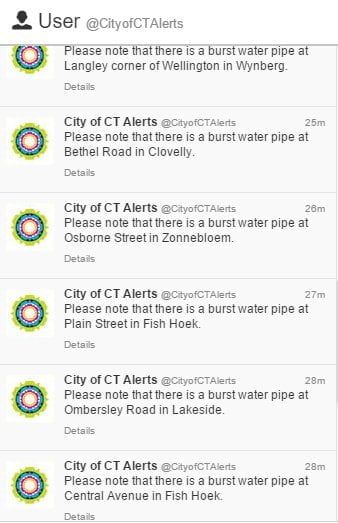 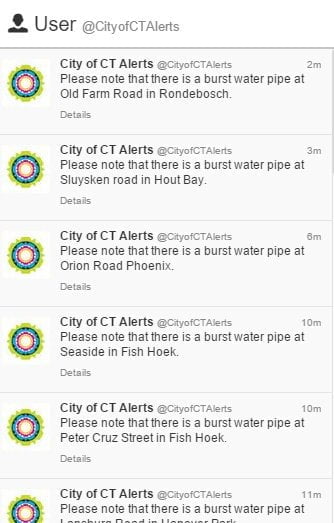 Just a sample of their twitter feed this morning. And I’d happily wager that any of these burst water pipes wasted more water than any Slide The City event.

Not that I am suggesting the just because water is being wasted somewhere, that makes it ok to waste more. Not at all. In fact, the fact that so much water is being lost to burst pipes and naughty people should encourage each of us to use water more sparingly.

But going after Slide The City, who are providing entertainment for literally thousands of people at a very, very limited cost to the environment? I’m sorry, but that just smacks of an ill-informed, cheap points scoring exercise.

Disclaimer: 6000 miles… has no affiliation with Slide The City. I just wish people would actually think before they sign online petitions.