I’m so full of snot today that I feel it may be a case of home-bathkids-dinner-bed. Thus, noting that blogging is not included in that plan, just before I instigate part one, a quota photo.

It was two years ago to the day that we packed the car and the 10½ month old boy and headed down to Simonstown for the weekend, staying in a house with an implausibly steep driveway and a seemingly infinite number of steps up to the front door.

The weekend was spent (as I remember), poking penguins and playing football on the beach. And drinking: Yes, it was empty*

I have just noticed that my plan for the evening also fails to mention any red wine. It would surely be foolish to miss out on the immune-boosting benefits of vitamin C that come as a helpful by-product of fermented grapes. Especially the rather decent (and rather local) Steenberg Merlot.

I shall be sorting that out with dinner, never fear.

* once he’d finished with it, it was, anyway.

A quick comment on tonight’s Carte Blanche show, specifically the UCT/Sax Appeal/Blasphemy bit. (Probably not put together ever so coherently because I’m tired. Sorry.)

…nothing was said by Naidoo – or any other person of religious persuasion – to lessen the impression that free speech is all fine, unless you say something bad about my invisible friend, who – despite so much financial, spiritual and emotional support – is still surprisingly vulnerable to attack-by-cartoon. If only Satan had known…

Thus speaks Jacques Rousseau, who was interviewed for the report, arguing for the right of free speech. He describes himself “rather disappointed” with the report that aired and I can see why.
While I fully understand that you can’t condense every opinion into 8 minutes (or however long it was), you can at least provide a balanced viewpoint and allow both sides to equally have their say. That would surely provide the most fertile grounds for open debate – no matter that this seems to have come down to the rather empirical battle between christians and atheists.
However, Carte Blanche chose to play it safe, erring on the side of caution and not risk further offending those already offended christians. (Afrikaner puppy farmers are, however, evidently fair game.)

So hardly punchy, contraversial journalism, but the viewing figures are saved; although why has no-one asked why Derek Watts is allowed to work on the sabbath – something that must have surely enraged the fundamentalist christian groups they were actually trying to pacify.
Expect letters to the papers and Errol Naidoo calling for an MNet boycott.

Considering I’ve never lived in London, I have always had a strange fascination with the London Underground. I’ve never lived in Budapest, Paris or Berlin either, but I have a strange fascination with their underground systems as well. Sheffield, Oxford and Cape Town don’t have underground systems  (too hilly, too small and big flat lump of rock in way, respectively), but I was happy to flirt briefly with the Metro in Newcastle whilst studying there. It was fun for a while, but it was never going to last. I was so hurt when I discovered that she had been allowing other people to ride her during our time together.

Anyway, one of the best known things about the London Underground, aside from its innate ability to attract young muslim men with rucksacks, is the famous network map. First devised by Harry Beck in 1931, the evolved version is now a design classic and inspired Simon Patterson’s 1992 piece The Great Bear, which I don’t have a copy of. 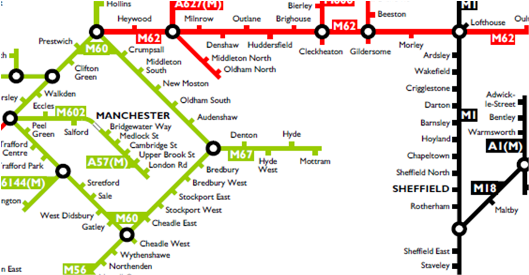 What I do have is a copy of is the map above by Gerald Higgins, downloaded from here. And, thanks to my wonderful wife, it is now framed and sitting (vertically) on the wall right next to me.
Yes, this is the UK Motorway System documented in the style of Beck’s Underground map.

Revisiting Higgins’ site recently, I see that he now has another one (which has nothing to do with Beck or the Tube) to add to my collection: It’s Grim Up North – a map showing all the towns and cities mention in the KLF’s 1991 song of the same name. 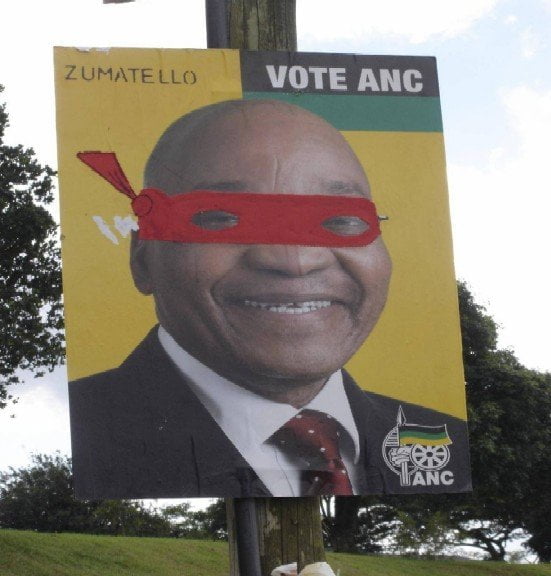 ¼ of the world’s most awesome fighting team

Straight away, one can see the direct parallels:

Donatello (who wore the purple mask, of course) was the brilliant scientist, inventor, engineer, and technological genius. He was perhaps the least violent Turtle, preferring to use his intellect to solve conflicts.

Zumatello (who is wearing the red mask, above) is the brilliant ANC President, polygamist, alleged fraudster and political genius. He is perhaps the least trusted Turtle, preferring to use his friends as scapegoats to avoid prosecution.

6000 miles… does not condone the defacing of election campaign posters unless it’s really, really amusing and you send photographic evidence to us here chez 6000.

Ask anyone anywhere in South Africa what the biggest scourge in this nation is and they will probably answer “crime” or “Jacob Zuma”. Ask them what is the biggest scourge on the roads and they will probably answer “crime”, “Jacob Zuma” or “taxis”.
Taxis are a law unto themselves in this country, breaking rules, endangering lives and making the ride to the amusement park a lot more of an adrenaline rush that the roller coaster once you actually get there.

So reviled is the minibus taxi – and so happy to disregard any rule of law – that Helen “Twee Hoede” Zille, mayor of Cape Town, has threatened to call in the Army to make them behave.
Meanwhile, civil rights group AfriForum have suggested that citizens take photos of “lawless taxis”:

AfriForum created an e-mail address, taxi@afriforum.co.za, to which the public may send the pictures, as well as details of the event, after which AfriForum’s legal team will formulate a complaint on behalf of the public for submission to the SA Police Service.

Alternatively, if you don’t want the bother of emailing a picture in, you could always just put it on your blog with a brief description of the driver. 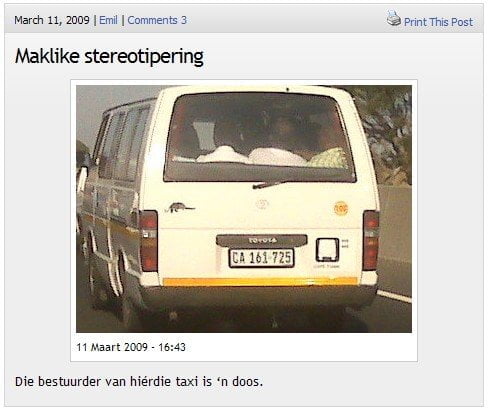 Don’t hold back: tell us what you really think, Emil!

For you non-Afrikaans speakers out there: “Easy stereotyping – The driver of this taxi is a [censored].”

Better out than in, Emil. Thanks for your honesty. Aaaaaaand relax!